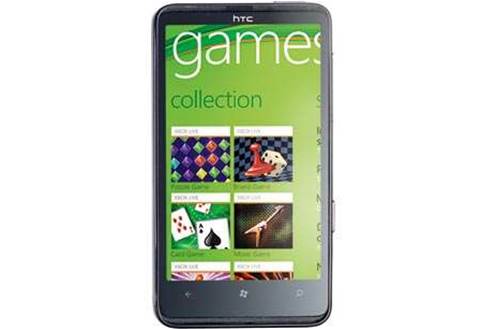 The HTC HD7 bears an uncanny resemblance to HTC’s year-old HD2 handset. Its screen is the same size and resolution, its CPU is identical, the camera has the same resolution and twin-LED flash. Physically, it’s similar too.It’s a very different thing to use with Windows Phone 7 on-board, however, and as with the other two devices on test, it feels snappy and responsive in general use.

The 4.3in, 480 x 800 touchscreen is excellent. It isn’t quite as bright and colourful as the Omnia 7’s, but the phone’s sculpted lines mean it feels more comfortable to hold and is easier to slip into your pocket.

The camera on the HD7 is less impressive. Photos in good light are reasonably sharp and colourful, and the twin-LED flash works well in dimly lit rooms – but it can’t match either of its rivals here for pure quality. The 720p video mode is also disappointing, producing smeary, muddy results.

The battery is a bigger problem. At 1230mAh it’s simply too small for a phone this large and powerful, and after our 24-hour test, it had just 40% of its capacity remaining. That’s under par for a smartphone of its type, and well short of the 60% achieved by the Omnia 7 and the HTC 7 Mozart.

Available exclusively from Telstra, the HD7 needs to stay relatively cheap or be priced out of the market.