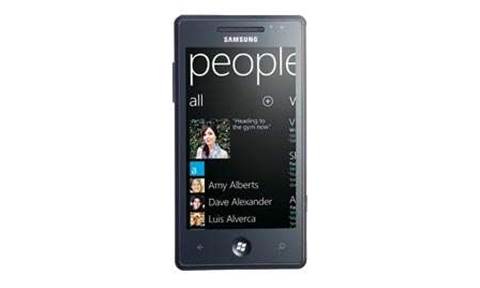 Of all the launch phones, the Samsung Omnia is the most arresting. It’s the screen that does it: a 4in, 480 x 800 Super AMOLED beauty, it beams its brilliance more boldly than any other phone we’ve seen. There’s a little more graininess than with a TFT, but its saturated colours and almost perfect contrast compensate.
Elsewhere, it’s a little less impressive. The 5-megapixel camera is fine in good light – as is the 720p video camera – but we’d recommend turning off the flash as it tends to bleach out subjects at close quarters.
The Omnia is nicely made, with an aluminium rear plate lending a feeling of quality and solidity. However, it’s also big and bulky, and feels awkward in the hand, far more so than the HTC HD7.
Specifications are as you’d expect with GPS, Bluetooth, and 802.11n Wi-Fi the highlights. There’s also an FM radio tuner thrown in, and for Orange customers turn-by-turn satnav.
Battery life and performance are good; around 60 percent capacity remained on the gauge after our 24-hour test, which is about par for the course for a top-end smartphone. It’s quick too, although page-rendering times and JavaScript performance are a little down on the best we’ve seen.
It’s good, then, but price is again likely to be the stumbling block. The best deal from Optus (3GB data, $US900 calls) is only via the $US79 cap, which is a little more than others.
Got a news tip for our journalists? Share it with us anonymously here.