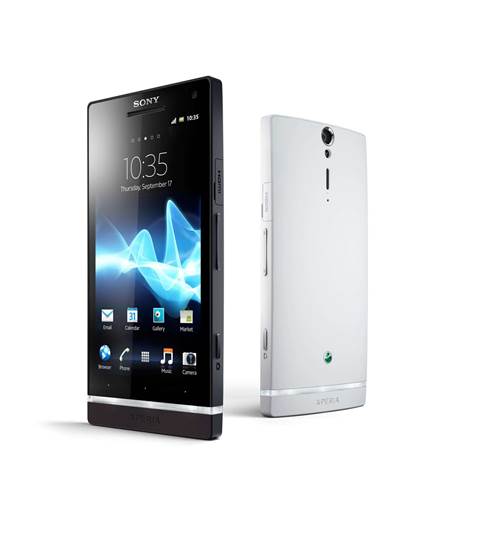 Sony is making a go of its smartphone range on its own, having bought out long-time partner Ericsson, with the Xperia S the first smartphone to lsoe the Sony-Ericsson joint branding.

Design-wise, the S keeps a lot of similar notes to the previous models in the Xperia range, the most obvious of which is the curved back. Sony has gone with a unibody style, using the now quite popular polycarbonate materials.

Whilst the back does come off the S, it’s only for the purpose of inserting the microSIM – the battery is built in and there’s no expansion port for microSD, but there is 32GB onboard. While we normally baulk at not being able to upgrade storage, Sony are providing all users with a 50GB Box.net account, which certainly eases the pain quite a bit.

The screen is 4.3in, with HD resolution of 1280x720, covered in shatter-proof and scratch resistant glass. As with other Xperia’s the S uses Sony’s Bravia Engine for the display, making for excellent video playback, although we found the viewing angle a little shallow, especially compared to the HTC One X (p 44).

The dual core 1.5GHz processor is zippy, helping the Xperia S get a Quadrant score of 3173 and a Sunspider result of 2649.3ms. Browsing was solid, and Sony’s UI overlay works really neatly.

The Xperia S comes with a micro-HDMI out port, although on Vodafone will be shipping the HDMI cable with unit, thanks to the strange vagaries of telco retail sales in Australia, While we’re usually not too fussed about HDMI connectivity, Sony has designed a special TV user interface that’s similar to Motorola’s Webtop, but with an emphasis on entertainment.

Thanks to the UI, you can check messages, use a web browser, hook into Sony’s Music Unlimited and Video Services, all from your TV. Even better, a CEC enabled TV means you can use your TV remote to navigate the Sony software.

We were also very impressed with the massive 12MP camera. The snapper really pushes the limits of what we’re seeing on most phones, with a massive range of features including red-eye reduction, panorama and more. Sony’s own Exmore R image sensor really helps here as well. The phone also features a dedicated camera button which overrides the lock screen – a very nice touch.

Sony has also included NFC in the Xperia S, with an eye to utilising NFC SmartTags. Rather simply, you can use a SmartTag (which basically looks like an ID disc on a dog collar) to set up and trigger a list of settings and commands.

Using the tag for work involves tapping the tag with the Xperia S via NFC to turn on Wi-Fi, shut down GPS, change your ring tone and turn off Bluetooth connectivity. Or you could keep one by the front door for exercise. Tap it as you leave to load a music playlist, turn off Wi-Fi, start up a running monitor app: the possibilities are wide ranging.

We were a little underwhelmed by the battery life however – the phone flatlined during our 24 hour tests and even when plugged in, it required a few minutes of charging before booting up. While aesthetically we loved the clear strip at the base (which houses the aerial apparently) we found ourselves inadvertently pressing it, rather than slightly above it where the capacitive buttons actually are. We also found the buttons to be slightly slow to respond, although this wasn’t a big issue.

In all, Sony has produced a stylish and well featured phone that, despite some niggles with battery life, speaks well for the company’s smartphone prospects in its post-Ericsson future.