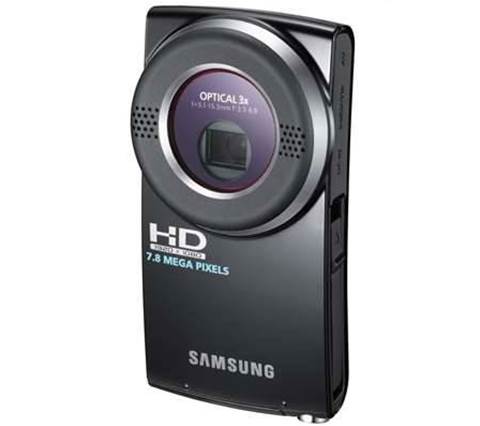 The Samsung HMX-U20 may look similar to Flip’s latest UltraHD pocket video camera, but the two devices are diametric opposites – where the UltraHD plumps for simplicity, eschewing menus and fancy extras, the HMX-U20 packs in all sorts.

The headline feature is a 3x optical zoom, the first we’ve seen in this type of video camera. Maximum resolution is double that of the Flip UltraHD at 1080p/ 25fps, or you can choose to shoot at 720p and a smoother 50fps. There’s no image stabilisation, but you do get 7.8-megapixel stills, a nifty time-lapse mode and stereo audio recording.

Quality is great, at least outdoors in good light. That resolution helps it capture more detail than the Flip UltraHD can and, in 50fps mode, panning shots and action look super-smooth. Colours look more natural than on the Flip, too.

Move indoors, however, and things very quickly take a nosedive. In low light, footage looks murky and dim, and in shadowy corners we spotted a lot of colour noise. Overall, though, the Flip is the better camera and its wider angle lens makes it a more flexible device, too.

Another area in which the HMX-U20 lags behind the UltraHD is usability. To accommodate that zoom lens, there’s a whacking great ring protruding from the front of the body. The button panel on the rear is fiddly, and the screen is unforgivably poor.

The same usability problems hit the HMX-U20’s onboard sharing and editing software, Intelli-studio. There are some nifty features, including basic timeline-based, multiclip editing, complete with text and transition tools, but it’s a fiddle to use compared with FlipShare. Plus, the HMX-U20 comes with no integrated memory; you have to add your own via an SD card before you can even start shooting.

The Samsung HMX-U20 just isn’t in the same league as the Flip UltraHD, but it’s saved by an amazingly low price. $202 means this camera makes a very tempting budget alternative.

Cloud application revenue made easy
By Jonathan Bray
Mar 7 2011
8:41AM