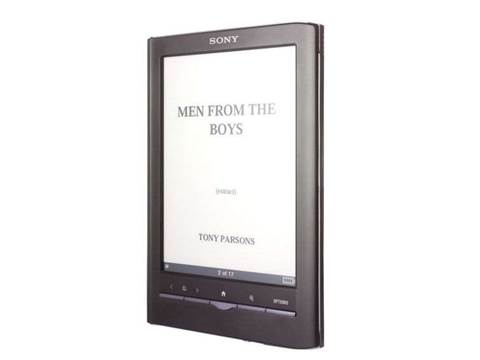 The new Sony Reader Touch Edition has its work cut out competing with the all-new Amazon Kindle. It doesn’t have integrated wireless, you can’t buy and download books without hooking it up to a PC, and it’s considerably more expensive too.

It’s a tough ask, but Sony has made a good fist of overcoming such seemingly insurmountable hurdles, and its first gambit is its physical design. No two ways about it, the Reader Touch (more specifically, the PRS-650BC) is a gorgeous piece of hardware. The front bezel and spine are cool-to-the-touch brushed aluminium, the rear panel has a grippy rubberised plastic coating, and the whole unit feels as if it’s been put together with a craftsman’s fine attention to detail. It’s solid as a rock too, and feels nicer to hold than the Kindle.

The Reader Touch boasts 2GB of internal storage, plus twin memory card slots on the top edge for expansion (one for Memory Sticks, one for SD cards). On the bottom edge resides a 3.5mm headphone socket for listening to audiobooks or MP3s, while a stylus is tucked into the top right-hand corner for making notes.

But, if you’re thinking this is more of the same, you’d be wrong. The PRS-650BC is a vast improvement over what has gone before and this progress is down to two key factors. First, the resistive touchscreen layer coating the E Ink screen has been replaced with an infrared optical sensor embedded in the screen bezel.

This makes the screen much easier on the eye and far less prone to reflective glare. It’s also far more responsive than before. The lightest touch is all that’s needed to activate buttons and menu items, and a swish left and right anywhere on the display lets you page back and forth through your texts.

We wouldn’t argue with either of these claims, both of which make a big difference to reading. The background is now closer to real paper than ever before, and although slight pixellation is still visible on the edges of characters, we have no qualms about going from our paper copy of Harper Lee’s To Kill a Mocking Bird to the eBook edition of Salman Rushdie’s The Enchantress of Florence; flicking from page to page with a stroke of the finger is just like reading a real book but without the rustle.

Coupled with the touch technology, the improved refresh rates make panning around and zooming into complex PDFs practical for the very first time on an eBook reader.

The PRS-650BC offers a compelling reading experience then, but Sony knows that isn’t going to be enough, not when Amazon is undercutting the new Sony readers so aggressively on price, and not when the book stores it partners with – Borders, Angus & Robertson, and Whitcoulls (for New Zealand users) – look so weak next to Amazon’s 400,000-strong catalogue. That’s why Sony is focusing marketing efforts on the promotion of various routes to free content.

To this end, each registered Reader comes with 100 free classic titles, and the Sony Reader home page offers a quick way to search through Google’s database of books to find those that are downloadable (Google’s own search doesn’t let you filter in the same way).

There are other advantages the PRS-650 has over its rival too, including superior handling of PDF files. Not only are complex image-based files handled with aplomb, but text-based books work well too. Zoom in on a PDF page on the Kindle and you’ll end up having to pan around in order to see the whole page.

The Sony, on the other hand lets you reflow text elegantly so it’s readable whatever zoom level you select. The dictionaries, of which the PRS-650BC comes with ten (one English, one American and ten for translation of German, Italian, Spanish, French and Dutch), are another handy extra. Just double-tap a word to launch a definition or translation.

It does have some weaknesses. The stylus lets you highlight exerpts and get back to them quickly via an alphabetical list, but the handwritten notes facility doesn’t work well at all – the touch sensor doesn’t pick up the nib in a smooth, continuous fashion.

Graphics occasionally leave a distracting ghost image on the screen when you move on a page (fortunately, this doesn’t afflict text); and the interface isn’t perfect: filing bookmarks under Notes in the menu seems obtuse, while scrolling through book titles with a scrollbar can be fiddly. We preferred to use the physical buttons or search using the onscreen keyboard.

But aside from these niggles, the PRS-650BC is an accomplished eBook reader. Its handling of PDFs in particular, plus the potential to borrow books for free from local libraries, begins to make it (and its smaller sibling, the Pocket Edition PRS-350SC) look a serious alternative to the Amazon Kindle. And we have no doubt there will be many who prefer its more open approach. The trouble is the Kindle is so good, and its price so much lower than that of the PRS-650, that most people won’t even get as far as considering it a good deal.