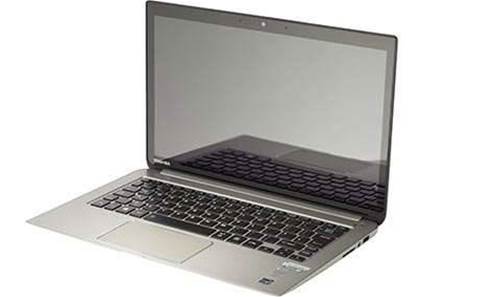 We weren’t sure what to make of the announcement of Toshiba’s brand-new Kirabook line of Ultrabooks, considering the last Ultrabook-like Toshiba product we reviewed was the underwhelming Portégé Z10t. However, one look at the specification, build and ergonomics of the Kira-101 put our fears to rest; compared to Toshiba’s previous effort, the Kirabook is a different beast.

We were immediately struck by the Kira’s looks, which, in stark contrast to the Portégé Z10t’s business-focused frumpiness, prioritise tasteful sleekness over bulky practicality. The back of its plastic lid and the keyboard’s base both have an attractive, brushed-metal finish. The corners are softly rounded and the lightweight magnesium-alloy base slopes upwards, rendering the front of the device significantly slimmer than the back, at 9.7mm.

There’s no hybrid mechanism to match the Dell XPS 12 or Lenovo IdeaPad Yoga 2 Pro, but this gives it a key advantage; at only 1.25kg and 23mm thick with its rubber feet included, it’s more compact and portable than either of its rivals.

Ergonomically, the Kira is a breeze to use: its Scrabble-tile keys are evenly spaced and gratifyingly clicky, and the metal base means there’s no flex to the keyboard. The buttonless touchpad is even better; gesture-tracking is competent, and we were impressed by the responsiveness of the integrated left and right mouse buttons. Perhaps the most interesting aspect of the new laptop, however, doesn’t concern how it looks when it’s switched off, but what your eyes are confronted with when you hit the power button.

Another highlight is the high-DPI, 2,560x1,440-resolution touchscreen. Although it isn’t the brightest screen around – we measured it at 251cd/m2 turned all the way up – the 1,569:1 contrast ratio lends images a solidity few others can match. Colour fidelity was good, too, the Kira yielding an average Delta E of 2.4.

Elsewhere, there’s more good news. The Kira boasts a Haswell 1.8GHz Intel Core i7-4500U CPU supported by 8GB DDR3L RAM, which puts it in good company. In our Real World Benchmarks, it scored 0.65 – that’s on a par with our February Ultrabook Labs winner and runner-up, the Dell XPS 12 (0.68) and Lenovo Yoga 2 Pro (0.59). The Kira’s gaming capability fell in line with what we’d expect from a high-end consumer Ultrabook. With graphical grunt handled by Intel’s integrated HD Graphics 4400 chipset, the Kira managed a respectable average of 50fps on low quality settings in our Crysis benchmark.

The Kira-101’s stamina is impressive, benefitting from the combination of a Haswell processor and the efficient new screen technology. In our light-use battery test, its 52Wh, 3,380mAh battery lasted 12hrs 45mins, similar to the XPS 12’s 12hrs 41mins and superior to the Yoga 2’s 7hrs 50mins.

Finally, the Kira includes a generous selection of ports. Along the left-hand side is a full-sized HDMI output and two USB 3 ports; on the right is an SD card slot, plus a 3.5mm stereo headset jack and another USB 3 port. There’s also dual-band 802.11ac Wi-Fi and Bluetooth 4 connectivity. It’s a fine selection for a laptop this small.

The Toshiba Kira-101 marks an excellent debut for the Kirabook range, and proof that Toshiba really does know how to build a luxurious consumer Ultrabook. It’s the best Toshiba laptop we’ve seen for a while, and goes toe to toe with the finest Ultrabooks out there. Despite lacking the fancy hybrid features of the Dell XPS 12 and Yoga 2 Pro, the Kira-101 matches them blow for blow. Our only reservation is that slightly high price tag. Bobby MacPherson

Distributors Dicker Data, Ingram Micro, Synnex and BMS
Launched May 2013 (refreshed April 2014)
RRP From $1,599 to $2,499
The reviewers say “It’s the best Toshiba laptop we’ve seen for a while, and goes toe to toe with the finest Ultrabooks out there.”

Eliminating departmental friction within MSPs
By Bobby McPherson
Jul 3 2014
10:55AM