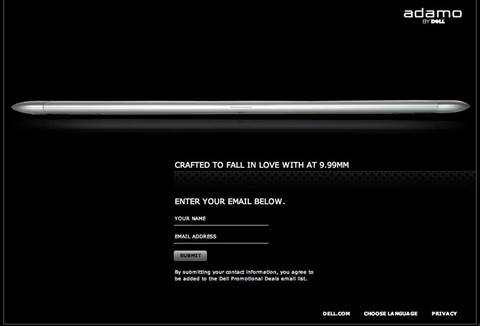 Dell looks set to introduce a new ultra-thin laptop that is even slimmer than the Adamo model unveiled at the Consumer Electronics Show at the start of this year, although details are sketchy at the moment.

The company has issued a teaser regarding the new Adamo By Dell concept, which is said to be just 9.99mm thick, and posted an online image purporting to be the system viewed edge-on to illustrate just how thin it is.

However, no other details were forthcoming from the company regarding specifications, weight, or any hint of a delivery date.

A spokesperson for Dell said that no other information is available, but promised that "more is to come soon", and hinted that the ultra-slim model is expected to arrive "sooner rather than later" in response to requests from V3.co.uk for further details.

The current Adamo measures 16.4mm thick, rivaling Apple's MacBook Air as the thinnest laptop on the market. It has a 13.4in screen and weighs about 1.8kg, while Apple's is noticeably lighter at 1.36kg.