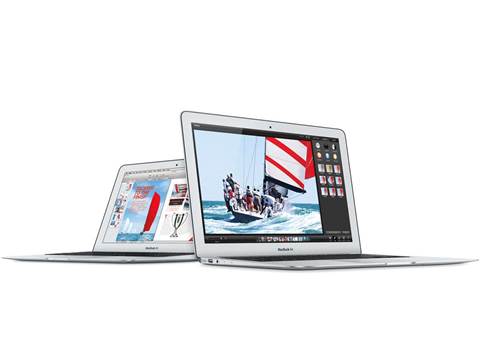 Apple today pulled the wrappers off a brand new series of MacBook Air models equipped with Intel Haswell chipsets – and the headlining improvement is battery life.

Haswell’s energy efficiency means that, even with better performance, the 11in and 13in MacBook Pros can deliver up to 9 and 12 hours of on-the-go use respectively. And standby time is upped to about 30 days.

The new models double the base SSD storage to 128GB. These are new drives too, and Apple claims that they’re up to 45 percent faster than the drives they’re replacing. Haswell’s HD Graphics 5000 on-board GPU is much beefier too, representing a 40 percent increase for graphics-intensive apps and 3D games. Wi-Fi is quicker too, thanks to support for 802.11ac (you’ll need a compatible router like Apple’s new AirPort Extreme or AirPort Time Capsule, natch).

The new models don’t feature Retina display screens, as some had hoped for, but the prices have been lowered from the previous generation’s. The 11in MacBook Air now starts at $1099 and the 13in at $1299. They are available from today.

Grabbing the hybrid cloud opportunity with Lenovo and Azure Services
By Sam Kieldsen
Jun 12 2013
11:16AM