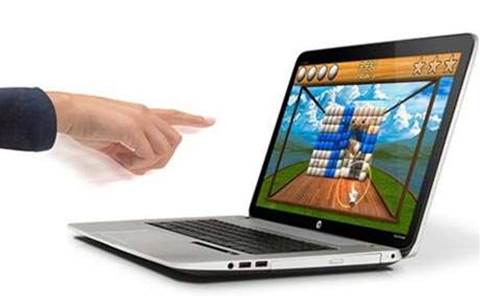 The Envy is a 17.3in laptop with the motion sensing controller embedded below the keyboard.

The integrated version of the Leap Motion controller is smaller than the standalone version; Leap Motion said it's less than half the height of the retail version, only 3.5mm high.

Using Leap Motion to navigate Windows 8 was a frustrating experience for our reviewer, and there are other downsides: according to The Verge, Leap Motion significantly reduces the Envy's battery life.

The controller can be easily disabled by pressing the function and space bar, with an LED showing when it's on.

The HP Envy 17 Leap Motion Special Edition will arrive in the UK in November, starting from £999 inc VAT.

Aside from the controller, it also features a 17.3in Full HD touchscreen display, 4th-generation Intel Core i7 chip, 8GB of RAM, a 1TB HDD and optional Nvidia graphics.

HP also unveiled the passively cooled Spectre x2 hyrid Ultrabook. The Spectre x2 has a detachable display to be used as a tablet, and as it doesn't require a fan, it has "no noisy hardware or unsightly vents", HP said.

The HP Spectre x2 features a 13.3in, 1080p display, and runs Intel's 4th-generation Core i5 chip. HP did not reveal Australian availability.

Grow your software revenue by selling these 5 affordable, essential tools for the modern workplace
By Nicole Kobie
Sep 20 2013
2:19PM