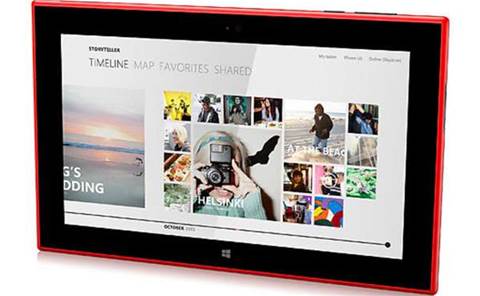 Windows RT has been thrown a lifeline with the release of Nokia's first tablet, the Lumia 2520.

The Lumia 2520 is a 10.1-inch tablet running Windows RT 8.1, the largely ignored ARM-based version of Windows 8 that only Microsoft and its soon-to-be-acquired mobile partner is continuing to develop devices for.

The launch comes ahead of the new iPad, which is expected to be announced later today.

The device is clearly targeted at the high end of the market, with a Full HD display made of Gorilla Glass 2. There's also the option of 4G connectivity.

In line with other high-end tablets, the Lumia 2520 runs a quad-core, 2.2GHz Snapdragon 800 processor. It comes with 2GB of RAM and 32GB of storage which is expandable via microSD. There's also a micro-SIM, headphone jack, HDMI port, a USB 3 port, plus Bluetooth 4 and Wi-Fi connectivity. It's also NFC-enabled.

The device is 8.9mm thick and features a 6.7-megapixel rear camera, equipped with Zeiss optics, and a 2-megapixel front snapper. The tablet has an 8,000mAh battery which Nokia claims will last for ten hours with normal use.

It will start from US$499 and comes in black, cyan, white or red.

The device comes as Microsoft completes its acquisition of Nokia's hardware business - and as it launches its next-generation Surface tablets.

"While the two companies are separate, Nokia's new device sits uncomfortably next to Microsoft's Surface, also launched today," noted CCS Insight analyst Geoff Blaber. "This is a perfect example of the integration issues Nokia and Microsoft will face going forward."

The company has also released five new handsets, including its first quad-core, 6in smartphone.

The long-awaited Lumia 1520 runs a 2.2GHz quad-core Snapdragon 800 processor – only possible after Microsoft updated the Windows Phone OS to support faster processors and bigger screens. The AMOLED screen is Full HD with 368ppi and is again made of Gorilla Glass 2.

Nokia has also packed in a slimmed-down version of its PureView technology with a 20-megapixel sensor. The phone weighs 209g and is 8.7mm thick.

It comes with 2GB of RAM and 32GB of memory, expandable to a further 64GB via microSD. There’s a micro-USB port, a headphone jack, USB 2 port plus Bluetooth 4, Wi-Fi and 4G connectivity. The handset is also NFC-enabled.

The Lumia 1520 is available in yellow, white, black or glossy red and will start from around US$749.

The cheaper Nokia Lumia 1320 also features a 6in display but at US$339, compromises on the components. That will initially roll out to emerging markets and some European countries by Christmas.

Nokia also bulked out its Asha range of entry-level handsets with the Asha 500, the Asha 502 and the Asha 503, boasting various new features such as 3G availability, integration with WhatsApp and improved camera sensors. All cost less than $100 and will roll out to emerging markets and Europe in the next few months.