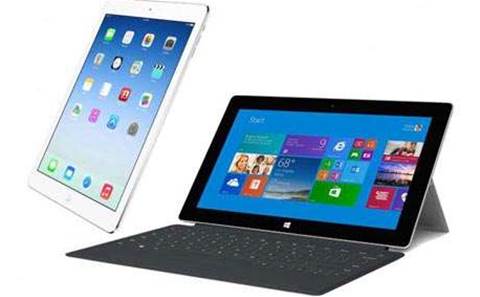 In the Redmond corner, we have the latest from Microsoft, the Surface 2 – the tablet for productive types that need more than just apps. In the Cupertino corner, Apple’s taken the wrappers off its latest and (in its own words) “greatest tablet ever” - The iPad Air. Can Apple's thinly-sliced slate compete with the flexibility of Microsoft's second-gen Surface?

It’s been an awkward first year for Microsoft in the tablet space, with the Surface RT failing to live up to its lofty expectations as an iPad killer. This year’s model has addressed many of the criticisms levelled at its predecessor – though with Apple’s slimmer, sexier and speedier iPad Air as the new de facto competition, let’s see which spec comes out on top.

Beauty beneath the Surface

On the design front, both tablets feel more like an evolution of their predecessors than a sea change. The iPad Air has gone for a major slim-down, weighing in at a svelte 469g and measuring an almost absurdly thin 7.5mm in depth. The 43 percent smaller bezel is the main design change you’ll notice if you’re upgrading from an older model, and the design feels more akin to the iPad Mini than the previous 9.7in variant. It's a gorgeous device from every angle, taking the winning design people know and love and refining it properly for the first time since the introduction of the iPad 2.

The new Surface is also a refinement upon the original: there’s a slimming down from 9.4mm to 8.9mm, and 5g shaved off the weight, despite other dimensions staying put. The silver swathes of magnesium still look fantastic and the Surface 2 feels solid and well-made in every regard.  The kick-stand we loved from the original Surface RT remains, but it now has a 40- as well as a 20-degree tilt – a welcome addition.

The original Surface was deemed a little lacking in its screen specs, something that Microsoft has rectified with version 2 – ramping the resolution of its 10.6in TFT touchscreen up to 1080p for a pixel density of 208 ppi.

With the iPad, the same 2046 x 1536 Retina display that has graced the last two generations of Apple’s maxi-slab puts Apple at an obvious advantage.  You may not notice from a distance, but up close and when displaying high-resolution photos, the difference becomes more apparent.

iOS is built from the ground-up to be a beautifully smooth experience – even if you were running multiple background apps or browser tabs, the A6-toting iPad was always a great experience. With the 64-bit A7 processor on board, the Air will laugh in the face of multi-tasking and next-gen mobile games. In fact, Apple claims it’s up to eight times faster than last year’s silicon. As for its 64-bit capabilities, we'll have to wait for more apps to support the architecture to truly see if they're worth getting excited about.

Microsoft sticks with Nvidia power for the Surface 2, moving on to the fourth generation Tegra processor (currently gracing other tablet and hybrid efforts from HP, Asus and Toshiba). The original was slightly underpowered and plagued with lag that, for many, severely soured the perception of Windows RT. There have been suggestions that the Tegra 4 is suffering from some unusual performance issues, but this isn’t what we’ve experienced. Of course, Windows RT 8.1 has more to it than iOS, and if you’re not careful with your multi-tasking you may quickly get bogged down.

Tablet photography qualms aside, the new iPad has surprised us by sticking with the same 5MP sensor with 1080p video – we’d been expecting a boost to 8MP. Even more surprising is the lack of features in comparison to the iPhone 5S (no panorama, burst mode or slo-mo) which, considering the devices share the same 64-bit processing power, is a little bewildering. Otherwise, as far as tablet competitors go, expect the iPad to perform admirably in daylight, though the lack of LED flash limits your night-time photographic escapades. The 1.2MP front-facing camera will keep Facetime users content with HD video.

The Surface 2 has had good improvements in this department, going with a similar 5MP, 1080p capable sensor to the Air but making it more usable thanks to the simple addition of an LED flash. Skype duties are handled by a front-facing 3.5MP camera that’ll wow your contacts with 1080p video. This seems to perform remarkably well in low light thanks to some worthwhile fettling by Microsoft.

Get connected – or don't

Connectivity is vital if you plan on being productive with a tablet – something that Microsoft has gone to great lengths to emphasise. The Surface 2 rocks a single USB 3.0, micro-SD expansion up to 64GB, Bluetooth 4.0 and Wi-Fi modes including N, Dual-Band and Wi-Fi Direct. There’s also video output provided by the Mini DisplayPort for piping HD content to your TV or monitor.

The Air matches Surface 2 for Wi-Fi and Bluetooth specifications, but Apple has stuck with tradition by making the iPad Air resolutely barren of any external connectivity options that don’t require additional dongles. With the right adaptor you’ll get (limited) USB connectivity, SD card reading and screen mirroring via HDMI or VGA.  If you’re a child of the cloud-connected generation then you might not deem the lack of ports enough to put you off, though again for productivity’s sake, a more elegant solution than a plethora of dongles would be welcomed.

There's battery life to be had

Both Apple and Microsoft make comparing their battery life in terms of capacity quite difficult – neither quote official specifications. From our delving, it appears the Surface 2 has a 31.5Wh battery, whilst the iPad bests it with 32.4Wh of juice.

Official battery life expectations are higher on the iPad at around 10 hours. The Surface 2 manages up to 8 hours of use, which coupled with the Watt-hour figures means you’ll likely be reaching for a charger that bit quicker with the Surface 2.

The Wizard of OS

Apple has recently taken a reasonable amount of flack for the seventh update of iOS, mostly levelled at its more simplistic design. But there’s no denying that simplicity still works and improvements such as the quick-settings draw work as fantastically well on the big screen as they do in the smaller confines of the iPhone.

Windows RT 8.1 is unashamedly different to the experience you’ll get on iOS.  For those familiar with Microsoft’s combination of tiled menus and old-school desktop environment, you’ll feel right at home managing windows and apps separately with your own freedom to manage and interact with them.

The unmissable elephant in the room here is Apps, which is what ultimately drives most people’s tablet usage. iOS works exceptionally well with the 475,000-strong selection of tablet-specific apps that are now available. RT is a different story entirely: the selection of apps is still verging on dire, with the big names like Facebook only just getting round to releasing an RT compatible app.

Microsoft can’t even claim the Surface to be the singular tablet home of Microsoft Office any longer, with an iPad version already available with an Office subscription.

As far as specs go, the Surface 2 is a very realistic competitor to the iPad, and even beats it in a few areas such as the camera and connectivity. The £40 cheaper price-tag of the Surface 2 is not enough for it to be a massive advantage, and if you’re after one of the glorious type or touch covers then you’ll need to budget at least another £100.

If you’re intent on buying a tablet as a laptop replacement then the Surface 2 has to be considered. The familiarity of desktop-style apps such as Office will make it a no-brainer for anyone planning on being relatively productive, and the keyboard covers are a stroke of genius that third parties have (so far) failed to match for the iPad.

If you’re buying a tablet to consume the vast amount of information that is digitally thrown at you on a daily basis, or equally you’re happy being productive on one of the many very well designed tablet apps that Apple’s store offers, then the iPad is for you.

Us? Right now, largely due to its more polished ecosystem, we’d plump for the beautiful new iPad, though we’ll make our final decisions once we’ve published full reviews of both. For now, for those extra morsels of information on Apple’s latest, check out our iPad Air hands-on.