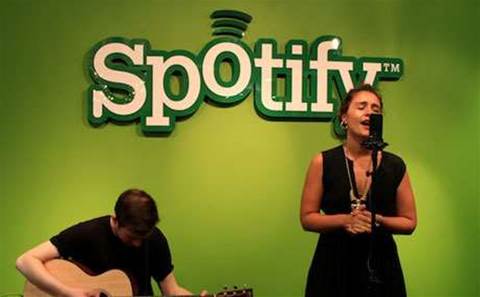 Online music-streaming service Spotify on Wednesday launched a free music service for smart phones and tablets as it tries to hook a fast-growing group of users keen to stream tunes on their mobile devices.

Spotify offers free music on desktop computers with advertising but customers previously had to pay for on-demand connection on their mobile devices.

Its new service will allow listeners to choose the tracks they want to hear for free - with commercial interruptions - in the hope that people will upgrade to subscriptions.

"The more music you play, the more likely you will pay," said Spotify founder and CEO Daniel Ek during a press conference at Spotify's offices in New York.

Spotify has about 24 million active users around the world of which 6 million pay to listen to music without advertising.

As smartphones and tablets mushroom they have become choice devices to listen to music, even in the home, Ek said.

"It's the one thing on my mind more than a year that had been bugging me," Ek said about the proliferation of mobile devices and making Spotify available on them for free.

Streaming music has soared in popularity but competition is fierce with US rival Pandora, Apple's iTunes Radio, Sirius XM, Rdio and a handful of smaller players all battling it out for listeners.

Revenues from mobile advertising at Pandora, which dominates the US music streaming space and has over 70 million active listeners in three markets, have been rising as more people tune in on their smartphones.

Ek said that Spotify plans to air an ad every three or four songs, similar to the frequency of advertising spots on Spotify's free desktop service.

Still, while consumers flock to streaming music services it has been difficult to turn a profit because of the cost to license music. Spotify strikes royalty deals with record labels and pays back about 70 percent of its revenue - already totaling $1 billion - to rights holders.

It's a point that Spotify brings up often that usually coincides with the announcement of an artist or band that has chosen Spotify as a partner.

This year, that group is Led Zeppelin, whose entire catalogue is now available to stream and on-demand exclusively on Spotify.

Last December Spotify announced that Metallica signed with the service - a notable addition since that group was once one of the leading crusaders more than a decade ago against the digital music sharing service Napster.