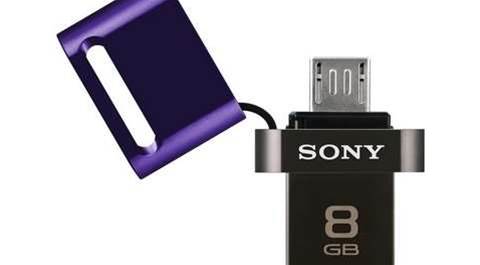 Forget storing everything in the cloud – Sony thinks many mobile device owners will want to carry around a USB stick.

The company has unveiled a two-ended USB stick, which plugs into a standard USB port as well as a micro-USB port for transferring data between mobile phones and tablets.

It isn't the first such device to be released - ADATA and Leef have similar products - but suggests that Sony thinks consumers aren't quite sold on storing everything in the cloud.

The device can be used for transferring files from a device to a PC and vice versa, and for backing up data, Sony said, and it can also be used to extend storage on devices that don't have micro SD card slots.

The micro-USB end fits most Android smartphones and tablets, but Sony promises support only for devices that run Android 4 and 4.3 - Ice Cream Sandwich and Jelly Bean - and offer the "on the go" (OTG) function, which lets a handset or tablet act like a host when connected to USB peripherals.

UK pricing and availability is yet to be confirmed, but for those who find the idea appealing, the 16GB version of ADATA's dual USB stick is available on Amazon for about £15.

Eliminating departmental friction within MSPs
By Nicole Kobie
Dec 13 2013
8:43AM