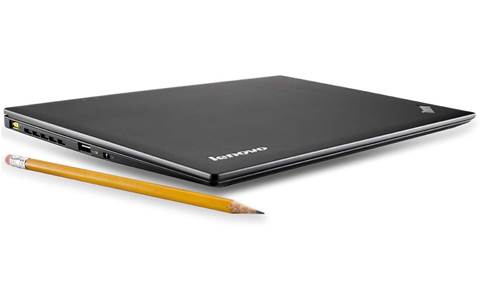 Lenovo has unveiled a ream of new convertibles and laptops at CES, including the third generation of its ThinkPad X1 Carbon Ultrabook.

On the inside, the laptop benefits from the Haswell treatment, configurable up to Core i7, with up to 8GB of RAM and up to 512GB of SSD storage.

There are now two USB 3 ports, compared to the single USB 3 and USB 2 on its predecessor, and a full-sized HDMI instead of the micro-HDMI used before.

Other new features include a new context-aware keyboard strip, replacing the row of Function buttons at the top of the keyboard. According to Lenovo, the keyboard highlights controls that are relevant to the app being used at the time - volume controls during movie playback, for example - "simplyfiying the user interface".

The company has also made the bizarre decision to replace the Caps Lock button with Home and End keys, and has also removed the dedicated buttons for the TrackPoint, which are now integrated into the TrackPad.

The Ultrabook also features a new "Rapid Charge" battery, which Lenovo claims can recharge 80% of the battery within 50 minutes.

Furthermore, Lenovo has delivered follow-ups to the Yoga 11 and Yoga 13, both now called the Yoga 2. The 11.6in model should arrive later this month in the US, and comes with a quad-core Intel Bay Trail chip and runs full Windows 8.1 rather than RT. There's also up to 500GB of storage, up to 4GB of RAM and up to six hours' battery life. The laptop features a 1,366 x 768 IPS display.

The 13in model comes with a Full HD screen, up to a Core i5 processor and a 500GB hard disk or hybrid hard drive. Battery life is promised at eight hours. That starts from $999 in the US, while the 11in model will cost $529. Australian pricing wasn't immediately available.

Grab the MSP security opportunity
By Barry Collins
Jan 8 2014
8:11AM