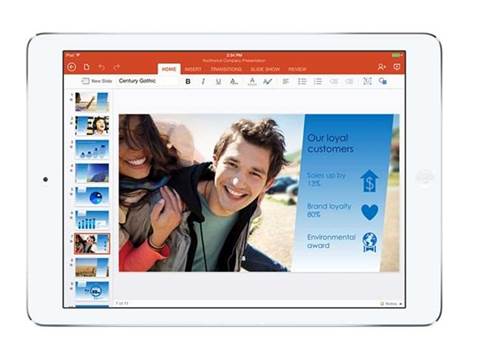 Like the company's apps for iPhone, Word, Excel and PowerPoint will be free, but only Office 365 subscribers will have the facility to edit documents. The apps effectively become readers for those who don't subscribe.

Microsoft says it has designed the apps from the ground-up for the iPad: they're not a simple port of the iPhone apps.

All of the apps retain the familiar Ribbon interface, although the number of tabs and features is necessarily reduced from the PC version of Office.

They're not short on power, though. Word for iPad includes facilities such as threaded comments and tracked changes, and allows users to edit charts and graphs embedded into documents. Photos can be dragged and dropped into new positions, with text automatically reflowing around the images.

In Excel, features such as Sparklines and suggested graphs are retained, and there's a special numeric keyboard for entering data and equations.

PowerPoint has all the themes included in the PC version, and has features designed specifically for those making presentations from their iPad, such as a virtual laser pointer that the presenter can move by poking the screen.

Nadella's maiden speech
Nadella's first appearance in front of the press was reasonably brief, and offered little in the way of long-term strategy. He repeatedly emphasised the mantra of "a cloud for everyone on every device", although support for Office on Android devices was conspicuous by its absence.

"Job one is to empower people to be productive - to do more across all devices," Nadella said. "We're taking great focus and great care to make sure Office for every device shines through."

Nadella plans to talk more about Windows at the Build conference next week, but insisted that "Windows is a massive agenda for us" and promised that "we will innovate".

All three apps can, of course, access and edit documents stored in Microsoft's OneDrive (formerly SkyDrive), although it seems the separate apps for Microsoft's cloud service will remain.

Microsoft Enterprise Mobility Suite (EMS) "provides comprehensive device, identity and access management with data protection from the cloud", according to the company.

It includes the cloud-based Azure Active Directory. This provides access management for more than 1,000 different apps, which employees can access with a single sign-on from a wide variety of Windows and non-Windows devices.