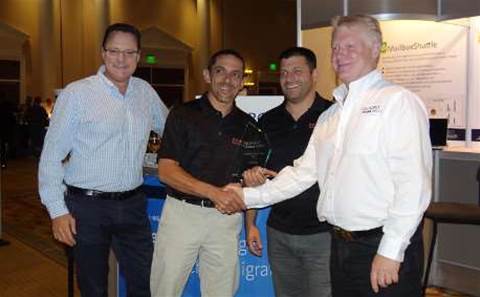 Sydney-based CRN Fast50 company Insentra has won a global partner of the year award at the Symantec Vision event at Las Vegas.

International data migration software vendor QUADROtech bestowed the honour for "consistent delivery of e-mail archive migration success" for customers, according to a statement from Insentra.

"We are very proud to have received this award from our partner QUADROtech with the knowledge we have been able to support and will continue to support the channel with a valuable service offering," said Ronnie Altit, Insentra's founder and managing director.

CEO of QUADROtech, Peter Kozak, said: "Their methodology, consultants and tangible success provides us and the channel with the confidence that the client will have all of their migration requirements met."

The statement from Insentra said that it has migrated 3 billion messages within 80,000 mailboxes. The service provider also claims to have "delivered 90 percent of all automated e-mail archive migrations in Asia Pacific" with tools from various vendors.

QUADROtech is a Swiss organisation formed in January 2012, although the vendor says its migration software has been around since 2005.

Insentra is situated in St Leonards, Sydney and is ranked 31st in the CRN Fast50. According to the company, it is the only "organisation in the region who represents all the leading global migration software vendors".

Eliminating departmental friction within MSPs
By Tony Yoo
May 18 2014
9:00AM