Will Windows 10 be a free update? 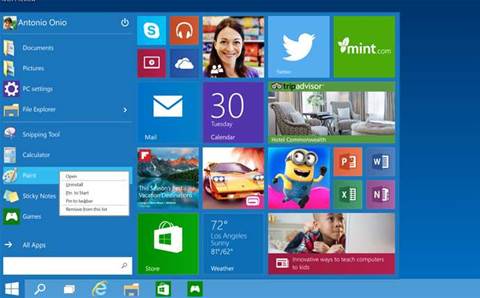 Microsoft COO Kevin Turner has sparked speculation by hinting that future versions of the Windows operating system may depart from the traditional software-licensing business model that the company has maintained for decades.

Rather than selling individual software licenses, many analysts have speculated that Windows 10 could move towards a subscription based service, much as they have with Office 365. It's a credible theory; when asked whether the company was planning to operate Windows as a loss-leader, Turner mentioned than they were instead going to have to “monetize it differently” through “additional services”.

In research analyst Owen Rogers' opinion, this could potentially translate to Windows 10 being distributed for free (at least in part) and charging users instead for software add-ons and cloud services: "Freemium software is win-win for both consumers and vendors... By penetrating the market with a free operating system, Microsoft could not only bring in more paid customers, but may also make Windows more appealing to the greater public”.

Could Microsoft copy Apple?
Apple's offer of a free update to their latest OS, Yosemite, has already set a precedent for this, and the announcement that users of the Windows 10 technical build will be able to upgrade to the final release version at no cost would appear to corroborate it. If Microsoft are willing to sacrifice the revenue from many virtually guaranteed customers, it indicates that it wouldn't represent a significant loss for the company, and that they were already planning to make it up in other areas.

This would appear to be a strikingly similar model to Office, which provides a free basic version for iPad but charges a rolling subscription for more in-depth feaures. This is likely to be Microsoft's preferred route, with a tiered pricing structure similar to its older OS' (think Windows 7 Starter/Home/Professional/Ultimate).

The key difference between this idea of Windows 10 and older iterations of the company's software, however, is that under the new structure, the low-end versions would be free, with increasing functionality available to higher-tier subscribers as bolt-ons. In this regard, holdings such as Office and Xbox Live appear to have been used as test-beds for ideas before a platform-wide rollout.

Windows in the Cloud
A cloud-centric approach to Windows is also heavily rumoured to be on the cards. CEO Satya Nadella has constantly reaffirmed the importance of their rapidly expanding cloud platform to the company's strategy, and it's their fastest growing sector by far, experiencing a mammoth 128% expansion last quarter. The increasing range of low-cost Windows laptops and tablets could be a sign that the company are planning to follow in ChromeOS' footsteps by utilising an increasingly online-based system.

Grabbing the hybrid cloud opportunity with Lenovo and Azure Services
By Adam Shepherd
Dec 10 2014
7:19AM