How Windows 10 will merge the tablet and PC 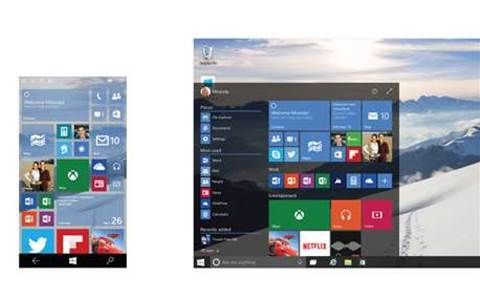 Microsoft has revealed more of how it plans to make Windows 10 even more palatable to the touchscreen market as well as its traditional PC user base.

Today it showed off more of the key elements that will arrive in Windows 10 for cross-device compatibility, including “universal” Office apps running on a phone and the ability to select different modes for tablet or notebook.

The ability to switch modes is a feature Microsoft is calling Continuum Mode. Windows 10 can detect when users detach a screen from a two-in-one device, switching to a touch-friendly tablet mode.

Microsoft also showed off a “universal” version of the Office apps, designed to display a consistent interface whether being used on a phone, tablet or PC.

These apps will have certain other advantages. For example, the Outlook app will use the full Word engine when editing an email.

Microsoft showed universal office apps running on a phone, including showing the Office Ribbon running in a phone’s app bar. The universal Office Word, Excel and Powerpoint apps will be included in the Windows 10 build for phones.

Certain touch gestures can also be used to control Win32 apps, such as swiping an app to the bottom of the screen.

The push to align the code running across the phone and PC will see a family of new universal apps including Office, Photos, Videos, Music, Maps, People & Messaging and Calendar.