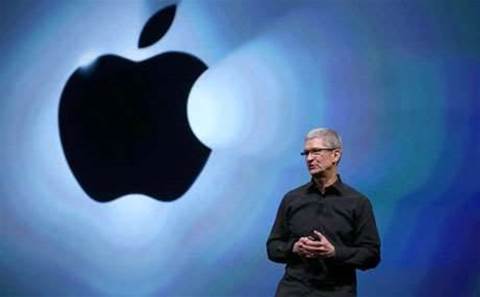 Apple sold a record-breaking 74.4 million iPhones for its first quarter ended 27 December, powering US$18 billion in profit on a nearly 30 percent increase in sales to US$74.6 billion.

Investors cheered what some are calling the biggest profit in corporate history, sending Apple shares up 6 percent in after-hours trading to US$115.44.

Apple CEO Tim Cook praised Apple's performance, stressing that "Apple's mission is to make the greatest products on earth and enrich the lives of others."

The 37 percent increase in profit to US$3.06 per share blew away the Wall Street consensus of just US$2.59 on sales of US$67.5 billion for the quarter.

The one stinging disappointment in the quarter came with sales of the iPad dropping 18 percent to 21.4 million units compared with 26 million units in the same period one year ago. The iPad sales drop came with Apple celebrating the five-year anniversary of the breakthrough tablet.

Cook remained optimistic about iPad's future, although he acknowledged there wouldn't be an immediate sales bump.

"I am still very optimistic and bullish on the iPad in the long run, as I've said before," he said. "In the short run, I don't think you'll see a miraculous change or improvement. [Part of this is] because the upgrade cycle is longer, it's longer than an iPhone, probably between an iPhone and a PC. We haven't been in the business long enough to say that with certainty but that’s what we think."

Tablet sales have long been an area of concern, as an IDC report released in November stated that 2014 would represent the first full year of decline in iPad shipments.

"I see that the first-time buyer rates are very high," he said. "When you have that kind of buyer rate you don't have a saturated market. When you look at the customer [satisfaction] rates on the iPad it's literally off the charts. When I back up and look at all of these I believe over the long arc of time that the iPad is a great business. That said, I'm not projecting something very different next quarter or the next. I'm thinking over the long run."

Cook added that he sees Apple's recent partnership with IBM as a further opportunity for tablet sales to see new growth in the future.

Apple and IBM partnered in December for their MobileFirst for iOS agreement, in which IBM would sell iPhones and iPads with industry-specific solutions to business clients worldwide, opening up enterprise opportunities for the iPad.