Gerry Harvey may finally get his way over GST 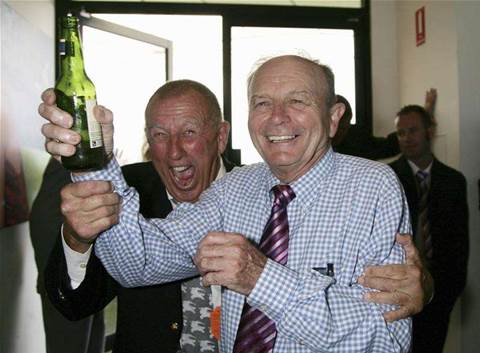 Australia's state and federal leaders have agreed in principle to expand the goods and services tax to include goods valued under $1000 purchased online overseas merchants.

The $1000 GST-free threshold for online goods and services from overseas has long been a thorn in the side of Australian retailers.

The issue of removing the $1000 threshold for online goods and services was canvassed in the government's whitepaper on tax reform in March.

The paper said such an approach was feasible, but progress had been held back because states and territory governments had not yet been able to agree on an approach to the issue.

However it appears those in opposition to lowering the threshold have changed their tune, with a memo from yesterday's inaugural Australian Leaders Retreat advising the nation's leaders had agreed to extend the GST to cover online goods worth less than $1000.

"As a first step, there was agreement in principle by leaders to broaden the GST to cover overseas online transactions under $1000," the communique read.

"This matter will be referred to the upcoming meeting of treasurers to progress in detail."

The treasurers meeting in late August will consider reducing the threshold from $1000 to $20.

A 2011 Productivity Commission inquiry [pdf] recommended against lowering the threshold despite finding strong grounds for it to be reduced significantly.

It said lowering the threshold to $20 would cost more than $2 billion to businesses, consumers and government while only generating revenue of around $550 million annually.

It recommended keeping the $1000 threshold as is until it was cost effective to lower it.

The changes to the GST rate on physically imported goods follow the introduction of the government's so-called 'Netflix tax' in its most recent federal budget.

Under the draft changes, from 2017 foreign companies selling digital goods and services into Australia will be required to levy the 10 percent GST.