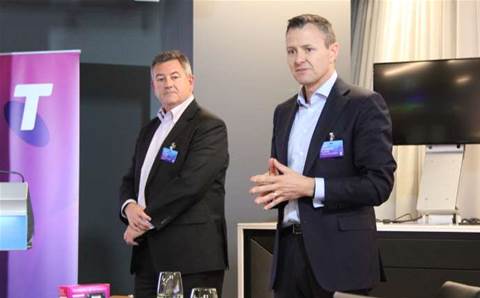 Update: This story has been updated to show Telstra's late announcement of VoLTE enablement for iPhone 6s and iPhone 6s Plus.

Telstra has claimed an Australian-first with Voice over LTE, an offering that allows mobile users to remain on the 4G network during voice calls.

Telstra networks general managing director Mike Wright called the change "one of the largest and most complex changes to voice calling" in more than 40 years.

"VoLTE is the next generation of how voice calls are carried over our network. In those 4G areas where VoLTE has been enabled, when customers make a voice call on a VoLTE enabled handset, the call is integrated into the 4G LTE data stream rather than the previous arrangement of reverting back to 3G," said Wright.

"This means voice and data stay on the same part of the network, therefore delivering faster data access while using the internet as well as super-fast call set up times."

Upon today's launch the Samsung Note 5 and the S6 Edge 6+ were the only handsets enabled for VoLTE, but Telstra mobile executive director John Chambers said that he expects all forthcoming handsets to eventually be ready.

"I can't announce other vendors yet, except that the new Sony devices coming out will be [enabled for VoLTE]," Chambers said. "I'm confident of the future ecosystem."

Later in the afternoon, Wright wrote on a Telstra blog that Apple's newly launched iPhone 6s and iPhone 6s Plus would also be "among the first [VoLTE] enabled devices".

The service that Telstra labels 'HD calling' extends from the wireless network out to landline services, such as NBN-enabled telephones. In a demonstration to the media in Sydney today, a 4G call from a mobile was made to a PSTN desktop telephone.

"If you make a call to a Telstra NBN service with a HD handset or to any of our business and enterprise services using HD IP telephony handsets you will also be talking in full HD," said Wright.

"This is seriously exciting because it’s only the beginning. We can now link the future for voice to the world of multi-media which will enable new and interesting applications and call flexibility, including a path to native voice calling over WiFi (VoWiFi) allowing a seamless handset experience, video calling over LTE (ViLTE) and even higher definition audio."