How Android is battling iOS to win the business customer 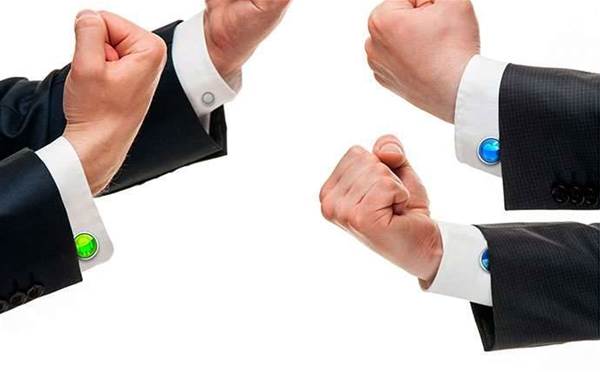 Android versus iOS is the PC versus Mac story of our mobile age. While that earlier saga got significant play in the tech communities, in specialist magazines, on bulletin boards  – and, later, web forums – it’s safe to say that in this hyper-saturated media world, the mobile battle has attracted more attention than Mac vs PC could have dreamed of.

Until smartphones are replaced by an as-yet-unknown technology, Android versus iOS will divide the tech sector like few other conflicts.

We think of the battle as taking place largely among the men and women on the street: the consumers. But it’s important to examine the smartphone war from an enterprise perspective.

Just as with the desktop battles of the 1990s, pure market share figures have Apple streets behind. The latest figures from IDC, published on 1 September, show 1.25 billion Android smartphones have been sold so far this year around the world, while 2016 saw Apple’s phone sales slip to just 203.8 million units ahead of the launch of the iPhone 7.

In terms of market share, Android sits at 85.3 percent globally with iOS responsible for the rest, apart from the last few Windows Phone and BlackBerry hold outs.

Much of Android’s global dominance, though, is built on sales of low-end and mid-tier phones, especially those sold in emerging economies. In contrast, much of Apple’s mountain of cash comes from sales of non-discounted, high-end iPhones.

In countries such as Japan, Britain, the US and Australia, the iPhone is often the top-selling smartphone. The latest numbers from Kantar Worldpanel indicate that locally the iPhone 6S and 6S Plus collectively accounted for 16 percent of handsets sold in the three months ending 30 June 2016. In second spot was the Samsung Galaxy S7 and S7 Edge just two points behind, while the iPhone SE was a distant third. Kantar believes iOS accounted for just over a third of Australian smartphone sales in the June quarter, with Android devices essentially accounting for the rest.

Apple is leading the enterprise, according to channel-centric analyst firm Canalys, which estimates that globally about 14.7 percent of iPhones and 12 percent of Android smartphones are bought by businesses large and small.

Although there are no detailed figures available for the Australian market, George Deligiannoudis, CEO of Sydney’s Mobilise IT, tells CRN that the local “enterprise and government sectors are predominantly iOS-driven at the moment”, with security as well as familiarity being the main reasons cited.

Until recently the perception that iOS offered superior security credentials was borne out by reality. In April, Gartner published a paper entitled Mobile Device Security: A Comparison of Platforms, that compared iOS 8 and 9 against Android 4, 5 and 6, as well as options from Samsung, Microsoft and Blackberry. It stated that iOS’s security advantage was being eroded.

Gartner found that iOS 8 and 9 are more secure than the most common Android versions, 4.x and 5.x. The tables are turned around with Android 6 (Marshmallow) being rated as more secure than iOS 9. Samsung Knox 2.6 was rated overall as the most secure variant of Android available, while BlackBerry’s changes to the Android platform also came out well ahead of iOS 9.

According to Andrew Toy, product director of Android for Work at Google, the company “for the last three years has been putting tonnes of investment into management tools, security capabilities, and anti-malware.”

Despite Android’s improved security, perceptions will probably take time to shift. There are other bugbears to live with, such as the glacial roll-out of operating system updates. For iOS, upgrades are a relatively simple affair.

Whenever Apple squishes a bug it codes up a new release and once testing is complete it can be pushed out to millions of devices within days. For Android, when Google is done with coding and testing its update, it needs to send it to all its device manufacturers and carriers for their own testing and verification. Only when that’s done does it start trickling out onto devices.

For many users of existing phones, it took between three to nine months to get the latest version, Android 6.0 (Marshmallow), onto their phones. Many are still waiting.

Compare this to iOS, where take-up of iOS 9 hit 12 percent within a day of its release on 16 September 2015. Apple’s stats at the end of August 2016 show that iOS 9 is being used by 88 percent of active devices, with most of the remainder on iOS 8. In Android’s defence, Google’s Andrew Toy also notes that the search giant now offers monthly security updates for at least the last three major Android releases, and these are now distributed to Nexus devices as well as Samsung phones.

Google has also been moving more and more of what end users consider to be core functionality out of the open source operating system, and into discrete apps and services that can be updated via the Google Play Store.

According to Mobilise IT’s Deligiannoudis, “all of [these security issues have] played to Apple’s benefit, and made it difficult for enterprises to adopt Android”.

Growth in smartphone sales around the world is slowing as we reach saturation point in many developed and developing markets.

With product innovation stalling, both Google and Android are focusing more of their energies on corporate sales.

To that end, Apple announced a partnership with IBM at its 2014 iPhone launch, and then followed it up with deals with Cisco in 2015, and SAP in 2016. Jordan Mari De Leon, an analyst at Canalys, says that for “an existing partner [of IBM, SAP and Cisco], these deals are a benefit”.

These new alliance partners all do a significant volume of enterprise business via the channel, particularly Cisco, which has one of the richest ecosystems of any vendor. In fact, Cisco chief executive Chuck Robbins predicted the partnership could help the famously aloof iPhone maker become more channel-friendly.

“I think we’ll rub off on Apple,” Robbins says.. “Tim came to our sales meeting, and he was on stage and saw the magnitude of this organisation being together and I think he realised what we can do in the enterprise.

“I know Tim well enough to know that he will be looking to us to help them think about what is the go-to-market motion that we need to make this successful, so I think that will certainly bring the partners into play,” says Robbins.

Despite these moves, though, De Leon believes that Apple hasn’t really “changed [its] ways with doing business with the channel” and that it is “still very strict [with targets] and not easy to do business with”.

Nor, by the same token, is Google. The search giant is more focused on extolling the virtues of its broad hardware ecosystem with Android’s wide variety of screen sizes, price points and more cutting-edge features, such as the pioneering use of larger screen sizes and NFC capabilities.

Toy also notes that for those who want an iPhone-like experience, they could standardise their rollout to one range of devices, say the Google Nexus line-up or the latest Samsung Galaxy S models.

Regardless of which mobile operating system businesses decide to go for, or whether they decide to specify devices for their employees or go for a ‘choose your own device’ or ‘bring your own device’ model, De Leon believes that “they all need to use a mobile device management (MDM)” system as smartphones are a “big risk” to an organisation’s data.
There are numerous MDM solutions available that work across both major platforms, as well as Windows and BlackBerry, including VMware AirWatch, Citrix XenMobile, IBM’s MaaS360 and SOTI MobiControl.

These solutions typically hook into operating system-level functionality to enforce basic security protection, such as requiring a PIN code or password to use the phone.
They can also remotely remove all the sensitive data or completely wipe a device, provide single sign-on and role-based authentication services, integrate with SaaS (software as a service) solutions, and geographically restrict a device to operating in a limited area.

Fact file: One-time king BlackBerry gets out of hardware

The once-mighty smartphone maker, BlackBerry, is getting our of hardware. The company will outsource the development and design of its smartphones, a product category it helped pioneer and popularise, as the Canadian company bets on software and managing rival devices.

Investors welcomed a further shift away the money-losing handset business, where BlackBerry went from being a market leader to trailing far behind rivals like Apple. The news came as the company reported a sharper-than-expected drop in quarterly revenue.

While some outsourcing of manufacturing had already occurred, BlackBerry will complete a full transition out of the hardware business by the close of the fiscal year ending in February, chief executive John Chen said. It will instead take a royalty on devices sold by partners.
The company signed a deal with Indonesia’s BB Merah Putih to manufacture, distribute and promote its branded devices in that country, its largest market for handsets. BlackBerry said it was also in late-stage discussions for a similar deal in China and working on several India initiatives.

“This is an entirely sensible decision and probably an overdue one,” said IDC technology analyst John Jackson. “Software revenue and the margin profile associated with that is where the focus should have been, and now can be.”

Morningstar analyst Ali Mogharabi said the news was reassuring even though some of the software and services revenue growth came from last year’s acquisition of Good Technology.