Surface Studio is Microsoft's desktop with a twist 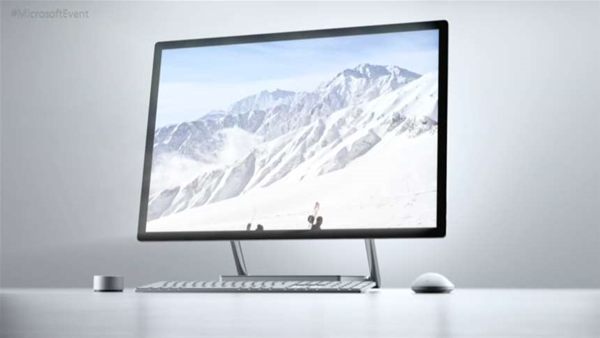 Your next Surface, Microsoft hopes, will not be a tablet or a laptop: it'll be a desktop. It's a bold move for the company, reviving a computing format that has been steadily going out of fashion over the years, but Microsoft clearly feels the market is there if delivered right and the result is the Surface Studio.

Aimed squarely at creatives, the Surface Studio is a 28-inch all-in-one computer that can be folded flat into a canvas that you can lean on as you work. Like its smaller Surface cousins, the huge screen is intended to be scribbled on with styli and caressed with fingers.

The idea is keeping you in the moment, not just by allowing you to tilt the screen flat, as a canvas, but by making it “effortless” to switch between drawing, typing and everything in between.

To that end it has a number of neat tricks up its sleeves, from displaying A4 paper at its actual size in Word to allowing you to highlight or scribble out entire paragraphs with a motion from the Surface pen.

Then there's the Surface Dial. A little round doohickey that allows you to interact with the Surface Studio (and some existing Surface Books) with twists and taps. It can be rested on the screen to provide different contextual options, depending on the situation.

In one scenario, Microsoft demonstrated how notes handwritten on a document can be played back, using the Surface Dial to rewind the words as they're written, allowing you to figure out the sentiment behind the words on screen.

Microsoft made a big play about immersion and keeping you in the moment, and to that end they've tried their hard to make it as silent as possible – both in terms of actual noise and its appearance.

The forged aluminium enclosure houses a screen that is just 12.55mm thick (with the thinnest ever LED, according to Microsoft, at just 1.3mm) and packs 13.5 million pixels – around 63% more than a 4K TV set.

Outside of the screen technology, however, specifications were glossed over incredibly quickly – if you blinked and missed it, Microsoft said it will be powered by an Intel Core i7 processor, backed with 32GB RAM, a 2TB hybrid hard drive and a Nvidia GTX 980M GPU.

So, it's a strange but exciting addition to the Surface range. Is Microsoft pioneering a bold new format that Apple and Google will be tripping over themselves to copy/pay homage to over the coming years (Pixel C and iPad Pro say Hi), or retreading an old battle for the home desk that has long since been lost?

We'll just have to wait and see when Microsoft releases the Surface Studio “this holiday season”. Pre-orders open tomorrow, from US$2999 (A$3923) in “limited quantities”.

Surface Book with Performance Base is the latest addition to the line, with more than twice the graphics processing power as the original Surface Book models, according to Microsoft. Pre-orders start today via the flagship Microsoft Store, Sydney, MicrosoftStore.com and select retailers in Australia, with availability from 8 December. The Surface Book starting price in Australia is A$3799.