Kodak goes back to the future 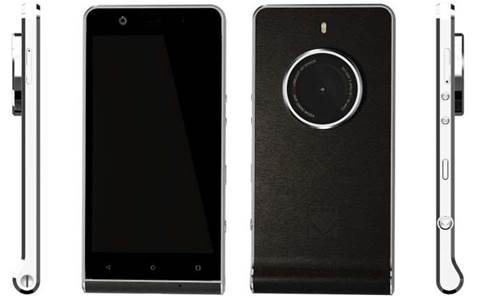 COMMENT  |  Is it the end of the line for cameras that are just cameras? You know, those things that can only take pictures. And not make phone calls. Although lots of cameras can now upload straight to Facebook, Twitter and Instagram, smartphones continue to get better at taking pictures. And they can, of course, still make phone calls.

The dudes who almost invented the camera have now announced their own smartphone. Yes, that’s right, Kodak, which pretty much owned the camera and film space for 125 years, has decided to release a new camera, inside a smartphone.

The Kodak Ektra has the sort of specs you’d expect on a high-range DSLR from Canon or Nikon, with 21 megapixels and an f2.0 aperture, plus an app that lets you pretend it’s really a DSLR after all. However, initial reports suggest the specs aren’t all that amazing compared with offerings from Apple and the Android pack.

And when compared with Samsung’s Galaxy Camera, which is a “real” camera with a proper zoom lens and stuff, which also happens to be able to make phone calls, the main thing the Ektra has going  or it is the retro look and feel, and the retro case. You can pretend you are carrying around your great-grandfather’s original 1940s camera. How cool is that?

But if your primary goal is to take killer photos with a pocket device, while only carrying one pocket device, the Ektra is banking rather heavily on “cool” to attract customers. This concept has worked well for Apple, but it spent decades establishing “cool”, long before the release of its iPhone.

Kodak, meanwhile, has faded from most people’s memories, unless you still use photographic film. Yes, some people still do that. Mostly they are making multimillion-dollar movies, but even those ranks are also thinning as “brought-up-on-film” directors move aside for the new breed of 4K video geeks.

Rabid must confess to still having a few Kodak cameras gathering dust  in the cupboard. They don’t get used anymore due to the lack of film to put into them. Is there anywhere left to get your film processed? You can still get “real” photographic prints from your digital snaps, but we’re sure you’d get nothing but confused stares if you arrived at the counter with a roll of film and asked someone to turn it into a wallet of photos.

The staff would probably expect you had tied your horse up at the front of the shop, or just stepped off the steam train at the nearest station. If you’re also carrying a newspaper, they might call the local nursing homes to report a lost resident.