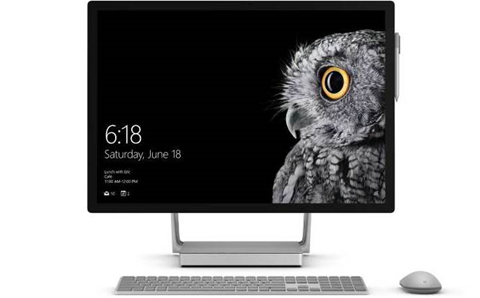 Microsoft has opened up pre-orders for the Surface Studio, with Harvey Norman and JB Hi-Fi the first resellers to get access to the vendor's first PC.

The device will start shipping on 27 April and is also available to purchase from the Microsoft Store. The two retailers were also the first to get their hands on Surface products when Microsoft opened up channel sales for Surface Pro devices in 2013.

JB Hi-Fi and Harvey Norman were also the first two partners to start selling Microsoft's first laptop, Surface Book, after it sold as an exclusive direct from Microsoft.

Microsoft turned heads when it revealed the Surface Studio in October last year, a desktop PC aimed at creatives that can fold down into a canvas.

The screen sizes up at 28 inches that’s housed inside a 12.55mm thick aluminium enclosure packing in 13.5 million pixels. It can be used with a stylus and Microsoft's new product, Surface Dial, a programmable dial that interacts with applications when rested on a Surface screen.

Microsoft also announced that the next major update to Windows 10 would roll out to customers on 12 April.

The Windows 10 Creators update, which was announced alongside Surface Studio, will offer new tools to creators such as 3D and mixed reality capabilities and additional security features, such as the new Windows Defender Security Centre.