Melbourne cloud integrator Ocius Digital does business in the US 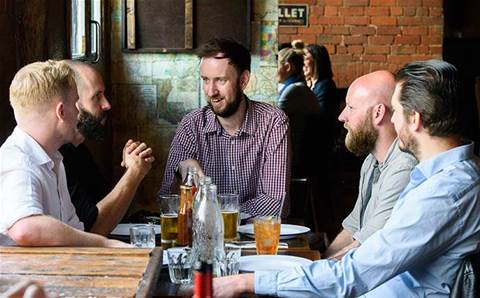 How do resellers go global? I don’t mean just picking up a low-cost employee or two in the Philippines. How big do you have to be to sell to and service businesses in other countries? If you’re integrating cloud software, you can do it with a handful of employees.

Ocius Digital (pronounced Oh-SCI-us) is a workflow design and cloud software integrator based in Melbourne and founded by Dan Fairbairn.

Ocius’ speciality is setting up inventory apps for the Xero accounting program. Favourites include Dear Inventory, Cin7, Trade Gecko and Unleashed. Typical customers are wholesale manufacturing and inventory such as breweries, distilleries and food producers. In one memorable project, it even set up inventory for a cannabis wholesaler in the US.

The work is well suited to export. While accountants must deal with local tax regulations and payroll, “with inventory, a box is a box and a unit is a unit,” Fairbairn says.

Roughly two-thirds of customers are Australian businesses (and 80 percent of those are in Melbourne). Another 20 percent of business comes from the US – which is surprising, given that American SMEs appear to be moving more slowly to cloud-based operating systems than their Australian or UK counterparts.

Fairbairn attributes the US surge to a greater acceptance of working with professional services companies. “There’s not the same DIY attitude” as in Australia and the UK, Fairbairn says. “When we talk to people in the US, we don’t have to explain what we do. They’re already set up to hire professional consultants.”

The final 10 percent are a mix of Irish, South African and UK companies which are often some of the most fun to work with, Fairbairn says.

“The companies we work with are quite cool, leading-edge companies because they have made the decision to work with a company on the other side of the world.”

Ocius employs five staff in Australia and one in Islamabad, Pakistan. It also acquired a company in the UK in February and plans to hire two more staff by the end of the quarter.

The UK company, Flying Fox IT, specialises in deploying Google Apps and Xero. The owner, Jonathan Fox, had contracted Ocius for a job integrating job management tool Workflow Max. It quickly became clear that Flying Fox could keep winning work for Ocius to fulfil, or it could take the Ocius brand and IP and expand more quickly.

“We’ve now got economies of scale. There are fewer firms doing [cloud integrations] in the UK than in Australia – and there’s not that many in Australia,” Fairbairn says. “Now Jonathan has a team of six experienced people behind him.”

The opportunity in the UK is massive, Fairbairn adds. “There are three times as many people in a country the size of a pebble.”

The acquisition began straight after the Xerocon South conference. CEO Rod Drury had talked onstage about how Xero partners were starting to export professional services.

“I heard that and the penny dropped,” Fairbairn says. “I think we will be one of the first [cloud integation partners] to cross borders. And I think plenty more will follow.”

The integrator wins a lot of work ahead of competitors who focus only on training rather than implementation, Fairbairn says. Setting up and using an inventory app can quickly become complicated, which raises the barrier to entry for consulting in this software niche.

“Anyone can read a help file and say it back to a customer verbatim. But then they click a button and the inventory should say ‘OK’, but it can’t because the product is in customs or it hasn’t shipped yet.”

In 80 percent of projects, the work is much more than software integration and training. Ocius questions how and why staff perform their tasks, and conducts a full operations review.

Ocius has two groups of clients; micro-businesses who want training in the cloud apps they use on a daily basis, and training the accounting department in larger companies with up to 100 staff.

“The clients we’re working with have operations in the US, UK and Australia, or they want e-commerce integration, or they have warehouses all over Australia,” Fairbairn says. “In those cases, Xero is just an addendum to the project.”