Microsoft Surface Pro gets a refresh 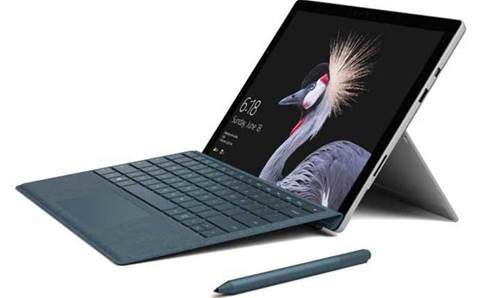 Microsoft has revealed a refreshed Surface Pro line overnight with a faster processor that promises 13 hours of battery life.

For those who have been waiting for Microsoft to release the Surface Pro 5, it looks like that's not going to happen, technically. Instead, Microsoft has opted to release a refreshed version of the 2-in-1 device - with some key changes internally, but no dramatic overhaul to the form factor - and just call it the Surface Pro.

We've rounded up some of the key specs that Microsoft has announced for the new Surface Pro as well as the price and release date.

Microsoft is keeping the display size the same on the new Surface Pro as compared with the Surface Pro 4, at 12.3 inches. The PixelSense display also sports the same high-resolution, at 2736x1824 pixels.

The thickness and weight of the tablet is also staying the same, at about 83mm thick and starting at 766 grams (the weight goes up slightly for the Core i5 and i7 models). And, Microsoft isn't shaking things up on ports, either. The new Surface Pro will feature the same ports as the Surface Pro 4 – a USB-A port and mini displayport, plus microSD and Surface connect ports for power and docking (still no USB-C).

Microsoft has redesigned the type cover for the new Surface Pro to contain slightly deeper key travel – "for faster and more accurate typing," the company said. The type cover also includes a full-size glass trackpad, and, maybe most significantly, it features Alcantara fabric around its keyboard (a la the Surface Laptop). The type cover will have a starting price of US$129.

Microsoft is also offering a new version of the Surface Pen, which the company said is now more accurate and is optimised for use on the new Surface Pro. However, this time around the digital pen won't come in the box with the Surface Pro, it'll be sold separately for US$99.

As mentioned, Microsoft is continuing the tradition of selling the Type Cover separately from the Surface Pro, which clouds the pricing a bit. The new Surface Pro will have a starting price of US$799, for the model with the Core m3 processor. That is the same as the starting price of the Surface Pro 4. Add the Type Cover to that and you'll get US$929, while adding the pen will put you over US$1000. Models with Core i5 start at US$999 and Core i7 will start at US$1599 (without the Type Cover or pen in both cases). Additional configurations are available based on the amount of RAM and storage included.

As far as the release date for the new Surface Pro, Microsoft said it would start shipping in the US on June 15, and pre-orders have begun now.