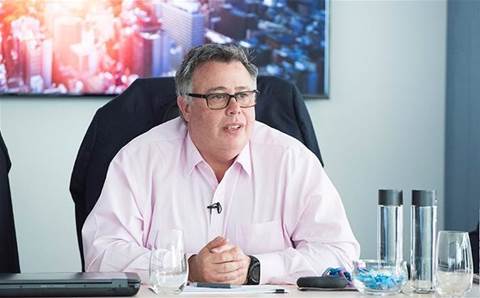 Substantial growth in personal systems and printing hardware and supplies gave HP Inc a 14 percent jump in global revenues during its first fiscal quarter of 2018.

PC sales both at the high end of the price range and at the low-priced Chromebook range showed strength, as did sales of 3D printers, said HP president and CEO Dion Weisler.

Weisler, speaking to press and analysts on Thursday, said the company had enjoyed four consecutive quarters of PCs and printers growing together, as well as five straight quarters of double-digit growth in its PC business which saw an increase in sales, profits and market share.

HP is currently the only company that is offering both productivity and prototyping capabilities on the same 3D printing platform, he said.

With HP's 3D printer sales, the company makes a healthy margin on the hardware sales and supplies, he said. Also, HP offers an open platform that allows third-party suppliers to provide supplies to HP 3D printer customers, with HP making money on such sales. "As a result of that, we have a very broad ecosystem around the platform," he said.

"[It's] a real opportunity to disrupt the US$12 billion manufacturing industry," Lesjak said. "That's the long-term goal."

Weisler also said that HP's integration of the Samsung printer business, the acquisition of which closed in November, is going well in the first quarter after they were combined.

The "S-Print" business, which is how the former Samsung printer business is now referred to, has so far been a headwind to profits, but with the acquisition, HP has gained an additional 1000 engineers and over 6500 patents, he said.

HP is currently recruiting channel partners with specific vertical expertise to start working with the company's 3D printers, Weisler said in response to a question from CRN USA. "We're being deliberate and focused on recruiting partners for 3D printing."

Lesjak, during the question and answer period of the quarterly financial analyst conference call, said that HP has already cut about 25 percent of the ex-Samsung SKUs, or stock keeping units, and combined some S-Print and HP products. The company has already started transitioning Samsung printer customers to HP.

"The faster we integrate, the quicker we create value," she said. "And that is our plan."

When asked by an analyst about HP's printing-as-a-service and device-as-a-service moves, Lesjak said that these would drive profits over time. "The contractual elements are there and happening," she said. "But it's slow and gradual… It's not meaningful at this time."

However, Weisler added, the as-a-service market, while relatively small, is growing. "The interest we're seeing regarding moving everything to as-a-service, both in small customers and large, is growing," he said.

Net earnings on a non-GAAP basis were reported as US$800 million, or US$0.48 a share, up from last year's US$600 million, or US$0.38 a share. That included after-tax adjustments of US$1.1 billion, or US$0.68 a share related to US tax reforms along with several restructuring and acquisition charges.

Personal systems net revenue of US$9.4 billion grew 15 percent in the quarter compared to last year, with commercial PC revenue up 16 percent and consumer revenue up 13 percent.

The company is also raising its revenue outlook by an additional US$1 billion, Lesjak said. For the year, earnings per share are expected to be US$0.15 over prior expectations at the mid-point, with US$0.10 per share coming from tax reform and $0.05 a share coming from improved performance, she said.