Samsung finally gives a sneak peak at its foldable phone 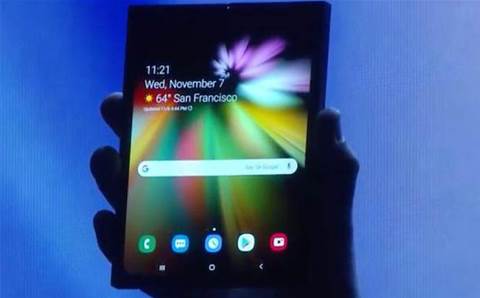 Samsung isn't sitting still while competitors such as Apple and Huawei look to take the smartphone in new directions.

During the Samsung Developer Conference 2018 on Wednesday, executives offered a glimpse into where Samsung is focused for the future of the smartphone—and how the company is looking to engage developers in its efforts.

Samsung executives offered a peek at the company's potentially groundbreaking foldable display technology, while also announcing a new user interface for Galaxy phones and opening up the company's Bixby intelligent assistant to the developer community. At Samsung, "we are breaking barriers and re-defining mobile technology," said DJ Koh, president and CEO of Samsung's IT and mobile communications division, during the event.

Samsung offered a first look at its long-rumoured foldable display, dubbed the "Infinity Flex Display." The company didn't announce a device that will feature the display, but did specify that a device with the display would offer 7.3 inches worth of screen space when it's unfolded—giving tablet-like functionality.

"When open it's a tablet, offering a big screen experience," said Justin Denison, senior vice president for mobile product marketing at Samsung. "When closed it's a phone that fits neatly inside your pocket."

The Infinity Flex Display depends on a number of display advancements, including the development of a new foldable adhesive, thinner display and, overall, the creation of a display that can be folded and unfolded repeatedly without degradation.

Along with a larger amount of screen space, benefits of the Infinity Flex Display will include the ability to use three apps at once, Denison said.

While specifics weren't given on when the display might first be available, Samsung expects to be "ready to start mass production in the coming months" for the Infinity Flex Display, Denison said.

Meanwhile, Google announced that Android will be officially supporting the foldable form factor and will be working to support new capabilities for foldable displays.

Along with changes meant to enhance visual clarity, such as tuning the colour of the UI design, One UI will simplify apps such as Settings to contain fewer choices and will make one-handed use easier—for instance, by automatically placing text messages on the upper part of the screen and putting touch interaction on the lower part.

One UI is entering open beta now, and will be available for the Galaxy S9, S9+ and Note9 in January 2019.

While Samsung's Bixby intelligent assistant has lagged behind others such as the Google Assistant, the company is hoping to turn things around by opening up Bixby to developers. Samsung is launching the Bixby Developer Studio, a set of tools for developing Bixby services (dubbed "Bixby Capsules") that can be made available to users in the Bixby Marketplace, the company announced.

Notably, the Bixby Developer Studio aims to simplify the development process by bringing artificial intelligence into the mix. The Bixby Developer Studio is offered as a downloadable integrated development environment where human developers can work together "collaboratively" with AI. Samsung executives said that human developers will need only to describe the "what" that needs to be coded, and the AI will determine "how" best to accomplish it — saving developers time in the process.

Bixby “is morphing from a product feature to a platform,” said Patrick Moorhead, president and principal analyst for Moor Insights and Strategy, in an email statement. “While Bixby isn't considered the leading intelligent agent right now, I am enthused with Samsung's first big developer push as the company learned a lot from companies before it, and looks like it is making it easier for developers.”

Grabbing the hybrid cloud opportunity with Lenovo and Azure Services
By Kyle Alspach
Nov 8 2018
9:50AM