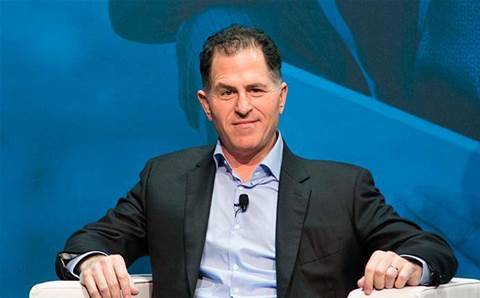 With its servers and networking business growing this year at 35 percent, storage at 10 percent and PCs at 12 percent, Dell Technologies founder and CEO Michael Dell is extremely bullish about his company's return to its former status as a publicly held company on 28 December.

"If you look at our data centre business, we are the largest and we're bigger than Cisco, bigger than IBM, bigger than [Hewlett Packard Enterprise]," said Dell in an exclusive interview Thursday with CRN USA.

"If you look at the growth in the first nine months through the end of October, our data centre business grew plus- 22 percent. So we’re the biggest and growing at 22 percent. … So now you've got the essential infrastructure company. It all looks like a beautiful picture."

Dell's data centre business, or the Infrastructure Solutions Group—which combines servers and networking, storage and the hot-selling VxRail hyper-converged system—brought in sales of US$26.83 billion for the nine months ended 1 November 2018, compared with US$21.96 billion in the year-ago period.

After nearly a year of planning for a return to the public market, including a battle with activist investor Carl Icahn, Dell is set to officially start trading on the New York Stock Exchange on 28 December 2018, under the symbol DELL.

Michael Dell spoke with CRN USA about the return to the public market, his 2019 outlook, Amazon Web Services' entry into the on-premises infrastructure market with Dell Technologies company VMware, and the rapidly changing technology landscape—including the impact of 5G networks on businesses of all sizes.

What does a public Dell Technologies look like and what's the strategy heading into 2019?

For our partners, for our customers and for our team members, there's really no change. We're operating with the same approach we have been for the last five, six years. We've been very clear that we're focused on the medium and long term, and we're investing for growth. We think the demand is going to continue to be very strong in 2019.

The momentum we have in the channel is quite strong. It's a very different company than it was five or 10 years ago. Obviously, we have almost 90 percent of our engineers and developers focused on software now. We have a whole different set of capabilities with Dell EMC, VMware and Pivotal and the rest of the family. We're in a very good spot.

The demand for technology infrastructure is going to remain very robust. We have a leading position that we don't take for granted. We have to work hard every day to earn the trust of partners and customers, but momentum is very good. When you look at the [third-quarter 2018] storage numbers that just came out, we're bigger than No. 2, bigger than No. 3, bigger than No. 4—all combined together, and we're growing faster.

Why are businesses going to buy Dell Technologies in 2019?

The end customers and many of the partners are saying, 'Why would I want to work with 20 little companies that are less capable when I can work with one company that is the leader? And, by the way, the problem I'm trying to solve is above all of this. So you guys just make all this stuff work, I'm going to do something else.' That's the way IT should work. Customers shouldn't have to worry about it.

What we refer to as revenue synergies, those have been way bigger than we thought. It's not that hard to think through it. It's like, 'I have EMC storage. Should I have Dell servers? Well, now it's Dell EMC storage and Dell EMC servers. So of course, let's do that.' We also now work with VMware. We created VxRail, which is more than a US$1 billion business.

We had another quarter of triple-digit growth in VxRail. It's been a total rocket ship and keeps going and going. vSAN from VMware is super strong, and we continue to drive that. So we're leading in every form of storage that you can think of, every form of servers you can think of, our client business continues to be very strong, and you have a robust demand environment.

What are your thoughts on Amazon Web Services coming out with hardware next year with AWS Outposts alongside VMware?

The VMware-AWS partnership is quite strong. There's nice growth in that partnership. We're also expressing our value with all the other public clouds as well. Customers want a two-way street there. They want to be able to move things back and forth. Sometimes it will be on our infrastructure and sometimes it will be on someone else's infrastructure—hopefully always with our software. This just shows that it is not a public cloud or private cloud, it's both.

How much public cloud repatriation are you seeing and how important is the software-defined stack Dell offers in terms of total cost of ownership versus public cloud?

I've described this before, but I think customers often go through a bit of a journey on this topic. They'll often start out saying, 'I'm cloud first. Everything to the public cloud.' And they go off on that journey and find that not everything moves so well to the public cloud. Some things work great, and some things don't work great. Some things are less expensive, and some things are more expensive. Then they realise that [the answer] is actually hybrid cloud.

As we show up with these more modernised, automated systems like VxRail, our converged and hyper-converged systems—which is seeing triple-digit growth—customers move toward, 'Not everything is a public cloud. It's multi-cloud, hybrid cloud and workload-dependent.'

I'm giddy with excitement about 5G. The reason is that it's just going to completely turbocharge everything that is going on because it's not just so you can talk on the phone faster—it's all about data and a thousand times faster and a thousand times less latency. The number of smart, intelligent and connected things is exploding, and with it comes way more data and way more need for organisations to reinvent themselves.

When we go and talk to companies in every sector from health care, aerospace, automotive, industrial—they're all putting intelligence in their 'things.' Think about it yourself, you're walking around with a little data centre and you have all these little connected things.

For example, I have this ring on that has a couple of microprocessors in there that's tracking my heart rate, temperature and gyroscope. That's just one small example. There are lots of examples in this across every sector. The last several decades have been quite amazing in terms of microprocessors, the internet and all these things, but the foundation that we're building on now with [artificial intelligence], blockchain, 5G and the cost of making something intelligent, it's a super-exciting time.

How is Dell driving 5G innovation and solutions around your infrastructure edge-to-core-to-cloud strategy?

With 5G, there is a big movement to NFV [Network Functions Virtualisation]. This is basically virtualisation of the network functions in the 5G network, and VMware has an incredible position and capability with NSX around NFV and is working with a large number of the leading telcos in the world.

The other thing that's happening with 5G and NFV is it's moving towards what you would think of as commercial x86 architecture. So the server business, where we've had six quarters in a row of double-digit growth—30 percent-type growth—this is a big demand driver for the server business.

With the amount of data being created, just think about the autonomous car, for example, it's going to be generating tons and tons of data. You're not going to have all that data going back to the centre somewhere. You're going to have the 'things' talking to each other. You can see it across many, many industries. 5G is not here yet, but it's coming in the next year or two.

What's the opportunity for moving Dell servers to the edge with 5G?

5G will be a big driver for the whole industry because it will drive the demand for IT infrastructure, the number of connected things and the amount of data being created. Certainly, the number of 5G base stations that have to be created is significant. Many of those will use our technologies—both software and hardware—and while that's really interesting and important, the things that it enables are even more significant.

That doesn’t mean we can just sit back and watch the orders come in. We have to go create solutions. We have to have fantastic partners. We have to continue to invest heavily in the technologies and build lots of partnerships to make it all happen. But it is happening.

So now you've got the essential infrastructure company. It all looks like a beautiful picture. If you go back to October 2015, when we announced this little idea [of acquiring EMC], people were like, 'What are you doing? How's that going to work?' Well, it's worked out quite well.

[Channel revenue] grew 21 percent in the third quarter [year over year]. It's right in line with the business. We have US$49 billion in orders through our channel partners, so lots of success. What's happening in the technology world is technology is no longer just in the IT department because companies are having to reimagine themselves in the world of AI, everything becoming intelligent and digitally connected, and massive increases in the amount of data. So that becomes the priority for the business line executives and for the chief executive of the company.

It's not the IT department that has to run the general ledger or the MRP [materials requirements planning] system. It's, 'How do you actually make your products and services better with technology?' If you don't do that, your competitors may do it, or some new company will come along and you'll be [taken over by] an Uber or Airbnb.

So customers are all in on the digital transformation that requires all kinds of new capabilities. Partners are jumping into this. They're having to evolve their capabilities. We've all been doing this for a long time. The successful companies are the ones that evolve. It's change or die. It's quick or dead. It's no different than it was, it's just now going faster and faster.

Grabbing the hybrid cloud opportunity with Lenovo and Azure Services
By Mark Haranas
Dec 18 2018
11:00AM