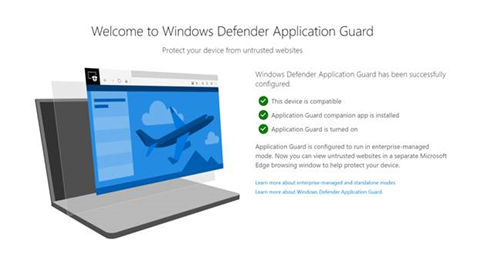 Microsoft’s all-but-admitted that Chrome and Firefox dominate the desktop by adding a security feature to Windows that protects the two browsers.

The new feature builds on Windows Defender Application Guard (WDAG) for Microsoft Edge, software that isolates web sites opening them in a virtual container isolated from Windows. Doing so means that any malware on the page will find it harder to get a toehold in Windows, and therefore also harder to penetrate a corporate network.

As the name implies, WDAG for Microsoft Edge works with Microsoft’s flagship browser.

But as Netmarketshare points out, Edge has just 4.23 percent market share globally, well behind Firefox’s 9.72 percent and Chrome’s 65 percent.

Which is probably why Windows 10 Insider Preview Build 18358, released on 15 March, included WDAG browser extensions for Chrome and Firefox. The new extensions mean that when a site on an enterprise’s naughty loads into either browser, “the user is redirected to an isolated Microsoft Edge session.”

That’s a win for admins, who can be sure their Do Not Browse policies apply across popular browsers. It’s also a win for Microsoft as it may expose more users to Edge, which Microsoft feels is under-appreciated even if it has decided to dump its own code base in favour of Chromium.

Even desktop security vendors probably won’t mind this move. Most still happily market malicious website detection and deflection features in their wares, but deliver that service through cloud-hosted lists of dangerous sites. Microsoft aims WADG at enterprise admins and assumes they’ll compile their own naughty lists.

Which leaves us with Google and Mozilla. The former is so far in the lead for browser market share that losing a few moments of use won’t bother it. Mozilla has more to worry about, as its market share has waned for years.

Eliminating departmental friction within MSPs
By Simon Sharwood
Mar 19 2019
6:48AM