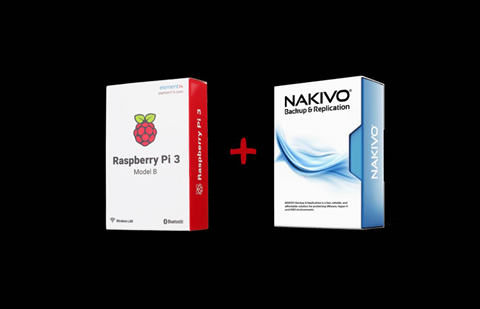 Data management software vendor Nakivo has just released a version of its appliance-poewring software for the Raspberry Pi single board computer, and suggests it as a disaster recovery option.

The Raspberry Pi edition emerged alongside Nakivo Backup & Replication v8.5, currently in beta but due to emerge on 23 April.

Nakivo’s thinking behind this release is that “A dedicated NAS box with remotely accessible network shares can fall prey to ransomware and other malware that finds its way into your infrastructure.”

Which is true enough to not be nonsense: plenty of NAS devices basically run Linux and/or use Intel CPUs, so they’re not an exotic target that’s beyond the reach of malware.

Nakivo’s blurb continues: “By restricting remote access to your backups with the help of NAKIVO Backup & Replication and Raspberry Pi, you can protect your data from hackers, ransomware, and other security threats. What’s more, if you don’t want the backed up data to be physically accessible to anyone else, you can easily transport your backup appliance to a different location or even have it with you at all times!”

Again, that’s reasonably sound thinking: an off-site backup appliance is a fine idea, especially if it is the only way to access a backup repository. But a Raspberry Pi makes little sense as that respository given it uses a micro-SD card and external USB drives for storage. That’s far from capacious or robust compared to something like an HPE Microserver that not only can house four disks (and don’t forget hard disks now reach 12 TB) but can also achieve RAID 5 redundancy.

Nakivo then kind of loses it, saying “With just a few additional precautions, you can make sure no hacker gets to steal or corrupt your data.”

Which is a colossal claim to make of any system, never mind the Raspberry Pi.

Nakivo's posted a detailed explanation of the rPi rig here.