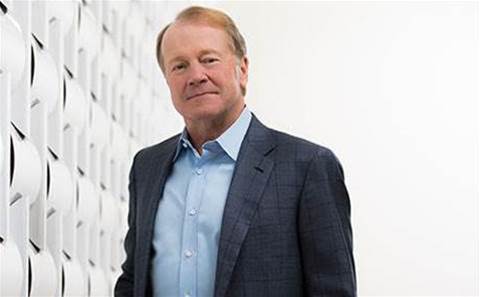 In a CNBC interview that aired Wednesday, Chambers gingerly acknowledged that Amazon was in the crosshairs of the company he chairs—one that recently emerged from stealth with a $145 million funding haul led by strategic partner Hewlett-Packard Enterprise.

Chambers closed the CNBC interview talking about a "very well-run and extremely dominant company in Amazon that we're kind of challenging a little bit to give everyone choice and selection in where they go."

The startup was founded by a team that has worked together for decades at Cisco. Pensando has been vague about a flagship product that will offload to edge systems networking, storage and other functionality to better speed, scale and secure the virtual machines that run enterprise workloads.

The company has already inked contracts with Oracle, a budding and often bitter AWS cloud rival, as well as Equinix, the world's largest data centre operator. Goldman Sachs (also an investor) and NetApp have also signed as customers.

Years ago, AWS developed something similar in Nitro, a system of dedicated integrated circuits and specialised software that offloads some of the heavy lifting from host machines provisioned through Amazon's next-generation C- and M-series of EC2 instances.

The C3 instances released in 2013 were the first to see Nitro in production, allowing EC2 to more closely mimic bare-metal performance. Amazon's technology took a major leap when it acquired Annapurna Labs in 2015 and put the Israeli chip designer to work creating integrated circuits for its third-generation Nitro box, improved in later C-Series instances by an optimised hypervisor.

Pensando claims to outperform Amazon's technology by five to nine times, without elaborating on how that metric was calculated.

Whereas Nitro is exclusive to AWS, Pensando will be available to the wider market, allowing enterprises to create "their own customized version of the cloud systems," Chambers said.

Pensando was founded by the so-called MPLS team that joined Cisco back in the early nineties: Mario Mazzola, Prem Jain, Luca Cafiero and Soni Jiandani.

Jiandani joined Chambers, who came on later as chairman, in the CNBC interview, and compared the product to the Android operating system for smartphones.

Whereas Apple controls the iPhone from the chip to the device to the software, the Android platform is open, and "allows a whole ecosystem to play," Jiandani said.

Pensando will do the same for data centres by offering chips and software that run on standard, off-the-shelf infrastructure built by cloud providers or enterprise customers, she said.

Chambers described the technology as a "software play on top of silicon" that will foster an ecosystem pushing compute, storage, networking, security, apps, and big data while driving major tech trends, such as 5G networking.

That ecosystem will deliver a hit to many specialised sectors of the infrastructure industry, Chambers said, by consolidating "appliance players, silo players, firewalls, VPNs, load balancers."

"We have yet to miss with any enterprise, service provider, cloud player in the world when we sit down and say what we do," Chambers told CNBC.

With HPE as both a strategic investor and go-to-market partner, Pensando looks to feed enterprise customers with dedicated infrastructure that enables them to architect more-performant clouds.

Lightspeed Venture Partners joined HPE in the US$145 million Series C round, and HPE CTO and Director HPE Labs Mark Potter will join the Pensando board.

"Our involvement goes well beyond financial; we are also aggressively integrating their technology into HPE solutions," Potter blogged.

"In the distributed world of edge-to-cloud, optimising systems with zero-trust security has long been the goal," Potter said. "And now that pie-in-the-sky dream is a reality, with Pensando and HPE joining forces to bring both intelligence and security to this data."

Grabbing the hybrid cloud opportunity with Lenovo and Azure Services
By Joseph Tsidulko
Oct 18 2019
6:37AM