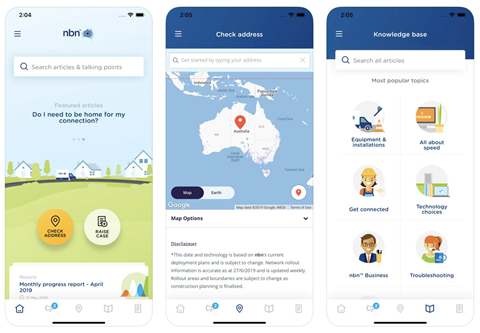 NBN Co has followed the example set by Foxtel and built a self-service app that its staff can use when hit up at social functions by family, friends and randoms for technical and troubleshooting assistance.

Anyone that’s worked in any IT domain will be familiar with the problem: once someone at a BBQ or social gathering finds out you work in tech, an instant assummption follows that you can and will happily provide an impromptu helpdesk service.

NBN Co’s solution to this is an app called nbn GO, which runs atop Salesforce’s Community Cloud and which enables staff to access NBN Co’s knowledge base when they are out and about.

The app can also be used to raise a support ticket in front of the person with the problem, and provide them with a timeframe when support will come back to them.

“Out in social life, we often get approached at social events where someone will come to me and say ‘Hey I’ve got this issue with the NBN, I’m not sure what I should be doing’.

“We use [our] Knowledge [base] so that an NBN employee can talk to family, friends or someone that’s just randomly approached them.

“There’s both knowledge and the ability to lodge the ticket there.”

There is a public iOS listing for the app - complete with someone’s one-star review of the app when they downloaded it and realised it wasn’t intended for public consumption.

That appeared to prompt NBN Co to update the app description to designate it a specific “staff app”.

“Family and friends often have a lot of questions about the NBN access network. ‘nbn GO’, the NBN staff app, is designed to help you to answer those questions and solve issues on the spot,” the description now reads.

From the app’s update history, it appears to have been first launched back in 2017 and augmented several times since then.

Ry Crozier attended Salesforce's Dreamforce 19 conference in San Francisco as a guest of the company.