As much as any time in recent years, CES in 2020 is providing a close look at the vision that consumer tech industry giants will be pursuing in the coming year—and beyond. The massive Las Vegas tech convention just officially opened today, but already tech heavyweights including Google, Samsung, Intel and Dell have unveiled products that are poised to drive forward key trends in 2020—including in 5G, artificial intelligence, mobility and robotics.

What follows is our roundup of 10 big CES 2020 announcements and new products you might have missed. 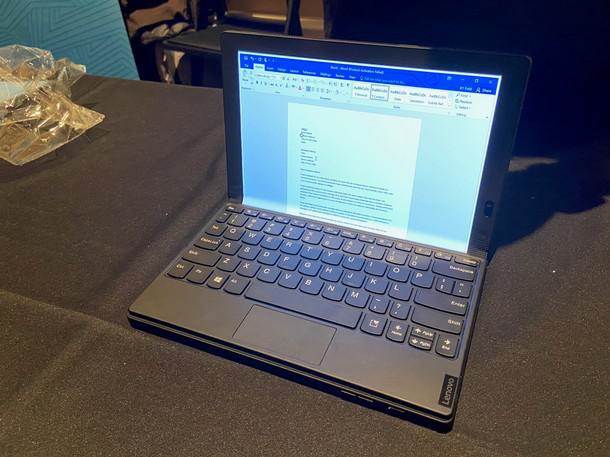 At CES 2020, Lenovo said it is aiming to pioneer a new category of devices with the ThinkPad X1 Fold, which the company is touting as the "world's first foldable PC."​ The company points to a wide range of possible use cases for the device—either as a tablet, a laptop or a desktop PC.​

The X1 Fold can be used fully open as a tablet in portrait orientation, or it can be used in landscape mode with an included Bluetooth-connected keyboard, the Mini Fold Keyboard (which is stored and charged inside the device when closed).​

While the device will initially run a standard version of Windows 10, it will be offered with Windows 10X—which is optimised for dual-display devices—at a later date, Lenovo said. The X1 Fold will be powered by an Intel Core processor, and will also have an option for high-speed 5G connectivity. Meanwhile, the device will be highly portable with a weight of just 1 kg (with the folio cover). ​

Lenovo's ThinkPad X1 Fold is planned for release some time in mid-2020. The starting price is expected to be US$2499. The pricing includes the Mini Fold Keyboard and Active Pen stylus.​ Samsung surprised CES 2020 by teasing a fresh concept in smart home assistants—with a demo of a small rolling robot called Ballie. The company touted Ballie as the future of personal care, and indicative of Samsung's "vision of a robot as a life companion," as Samsung Consumer Electronics CEO H.S. Kim (pictured) put it during the Samsung keynote on Monday.

Main functions for Ballie will include patrolling the home or serving as a fitness assistant, a remote control and a camera that records "special moments." Ballie will also be a "new friend to your kids and pets," said Sebastian Seung, executive vice president and chief research scientist, in the Samsung keynote. The robot will be able to modify its actions based on voice control, such as when a Samsung executive asked Ballie to "move a little faster" while following him onstage. (However, the company made sure to include a disclaimer during the presentation that "some functions may differ from the actual product.") The demo and video did not show Ballie itself speaking, though the robot—which is roughly the size of a softball—was shown making chirping sounds in the video as it rolled around a home completing its tasks.

Ultimately, though, Seung suggested that Ballie will be "part of the next evolution of IoT," in an "actively helpful" direction. Samsung did not offer an expected release timeframe or pricing for Ballie. AMD revealed its first 7-nanometer Ryzen processors for laptops, promising a mix of “ultra high-performance” and “ultrathin portability” that will reach more than 100 laptop designs in 2020, beginning in the first quarter. Lisa Su, AMD’s CEO, called the new Ryzen 4000 series “the best” processors for ultrathin laptops, packing up to eight cores, 16 threads and a 4.2 GHz boost frequency in as little as a 15-watt thermal envelope. AMD announced its most powerful desktop processor to date, the Ryzen Threadripper 3990X, which comes with 64 cores. That’s double the amount of cores of the Threadripper 3970X that AMD released last fall and the same amount of cores as AMD’s most powerful EPYC Rome server processors. AMD CEO Lisa Su pitched the 64-core Threadripper as a content creation juggernaut, capable of performing render workloads 30 percent faster than two of Intel’s Xeon Platinum 8280 server processors at less than a fifth of the price. Compared to Intel’s top mainstream Core i9-9900KS, Su said the Threadripper 3990X outperforms by several magnitudes, based on a Cinebench benchmark. Beyond its 64 cores, the Threadripper 3990X comes with 128 threads, up to a 4.3 GHz boost frequency, a 2.9 GHz base frequency and 288 MB in total cache. The processor will be available for US$3990 on 7 February. After announcing its intent to enter the discrete GPU market in 2017, Intel demonstrated its first product in the category, a discrete graphics card code-named DG1 that is made for laptops. The company showed a laptop with DG1 running a live demo of the PC game Destiny 2. Gregory Bryant, Intel’s top PC executive, said while “it’s early days” for DG1, it’s going to be “fantastic” not just for gaming but for content creation applications as well. DG1 is based on the same Xe GPU architecture that is powering new integrated graphics capabilities in Intel’s upcoming Tiger Lake mobile processors as well as the company’s first discrete GPU for servers, code-named Ponte Vecchio. With Intel’s Project Athena program, the chipmaker is finding new ways to lead in the mobile PC space, and those ambitions were on display in multiple ways. First, the company said it plans to deliver a new specification for dual-screen PCs as part of Project Athena. This means OEM and ODM partners will be able to co-engineer new dual-screen PCs with Intel that provide a certain level of experience and performance.

Then the company showed off new dual-screen PCs it has co-engineered with Lenovo and Dell: Lenovo’s ThinkPad X1 Fold and Dell Concept Duet. Last, the chipmaker showed off its own concept PC, a device code-named Horeshoe Bend (pictured) that comes with a foldable OLED display and runs on Intel’s upcoming Tiger Lake mobile processors. The Horeshoe Bend is similar to the size of a 12-inch laptop, but its folding touchscreen display can open to a span of more than 17 inches. Dell used CES 2020 to announce the upcoming debut of the Latitude 9000 series of business notebooks, the company's latest move to push the business computing category in a helpful new direction. The first offering will be the Latitude 9510 notebook, available both as a 2-in-1 or a clamshell model.

The notebook will include a 15-inch display with FHD resolution and slim bezels around the InfinityEdge screen. On battery life, the notebook is seeking to stand out with up to 30 hours of battery life on a charge.​ The Latitude 9510 will offer advanced connectivity, Dell said, with support for both WiFi 6 and high-speed 5G mobile broadband. HP Inc. is sharing its own vision at CES for where to take the business laptop segment next, with the unveiling of the Elite Dragonfly G2. Like the initial version from this past fall, the second-generation convertible will continue to feature a 13.3-inch display with FHD or UHD/4K resolution—but adds an option to include HP's new Sure View Reflect integrated privacy screen, which offers enhanced privacy.

The notebook is expected to be one of the first laptops to support high-speed 5G connectivity, with an option for including the Qualcomm Snapdragon X55 modem. Meanwhile, Tile tracking technology is coming as a built-in feature to laptops for the first time with the Elite Dragonfly G2, making it easier to track down the location of a lost notebook. On performance, the laptop will move up to Intel's latest processors, with 10th-generation Intel Core processors available, offering up to six cores.

The HP Elite Dragonfly G2 will be available "later in the summer," HP said. The company didn't disclose pricing details. With more than 500 million monthly active users of Google Assistant-enabled products, Google's voice-controlled smart assistant has made big strides in catching up to its earlier-to-market competitor, Amazon's Alexa. At CES 2020, Google announced several upgrades to the Google Assistant that aim to make it stand out with users--including around privacy, where Google has been a frequent target of critics. Austin Chang (pictured), director of product management for Google Assistant, announced that the Assistant will feature two new privacy controls that are themselves voice activated. The first is that you can now say, "Hey Google, that wasn't for you," to have the Assistant "forget" what it just heard you say. Users can also now say, "Hey Google, are you saving my audio data?" to get more information about privacy controls and be directed to the settings screen for changing privacy preferences.

In terms of new usability features, the Google Assistant will now gain new speech capabilities--with Google previewing more-natural reading of long-form content by the Assistant. "This experience is built on new voice datasets to create more expressive and more natural sounding voices, so it's easier to listen for a longer period of time," Google said. One area of focus for the technology is for reading online content such as blogs or news articles. Users will be able to say, "Hey Google, read this page" to trigger the feature. Google also said that the content will be able to be translated and read aloud in 42 languages.