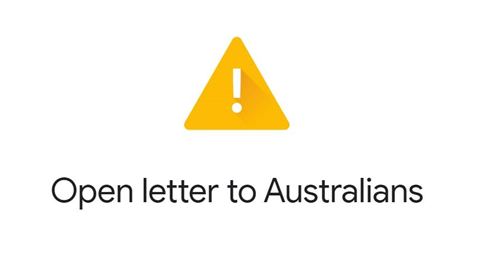 The Australian Competition and Consumer Commission (ACCC) has responded to Google’s claims on the proposed News Media Bargaining Code.

The tech giant alleges that the proposal would force the company to provide Australians with “a dramatically worse Google Search and YouTube” and could lead to customer data “handed over to big news businesses”.

The allegations were laid out in an open letter penned by Google Australia managing director Mel Silva, using a pop-up window within Google Search to direct users to the letter.

In July this year, the federal government and the ACCC drafted legislation to allow Australian news media to negotiate payment with digital platforms like Google and Facebook.

“You’ve always relied on Google Search and YouTube to show you what’s most relevant and helpful to you. We could no longer guarantee that under this law,” the open letter read.

“The law would force us to give an unfair advantage to one group of businesses - news media businesses - over everyone else who has a website, YouTube channel or small business.”

The ACCC responded to the allegations, saying Google would not be required by the legislation to charge Australians for the use of its services, and would also not be required to share any additional user data with Australian news businesses, unless it chooses to do either.

“The draft code will allow Australian news businesses to negotiate for fair payment for their journalists’ work that is included on Google services,” the agency said.

“This will address a significant bargaining power imbalance between Australian news media businesses and Google and Facebook. A healthy news media sector is essential to a well-functioning democracy.”